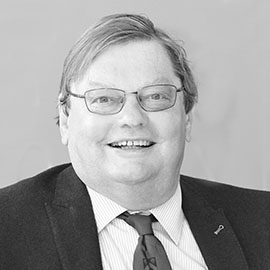 Cllr Tony Jefferson is leader of Stratford-on-Avon District Council and was appointed to the CWLEP board in 2018. Additionally Tony is a member of the Finance and Governance Board.

He gained his first degree in economics at Cardiff University and a second degree in business and management at Durham University Business School.

Throughout his career, Cllr Jefferson has worked at British Gas, British Steel, the Steel Industry Management College, the former Leeds Permanent Building Society and the Halifax Building Society (now HBOS) as well as running his own consultancy in leadership and management for SMEs.

In 2014, Cllr Jefferson was elected to serve the Welcombe ward as a district councillor and a year later, he was selected as Chair of the Overview and Scrutiny Committee at Stratford-on-Avon District Council.

In 2015, he became Portfolio Holder for Health and Wellbeing before he was elected leader of Stratford-on-Avon District Council in May 2018.

He is also the council’s representative at a number of organisations including the Coventry and Warwickshire Joint Committee for Economic Growth and Prosperity, Stratford Historic Building Trust and the Warwickshire Police and Crime Panel.