£2 million transformation of one of Coventry's oldest shopping streets underway 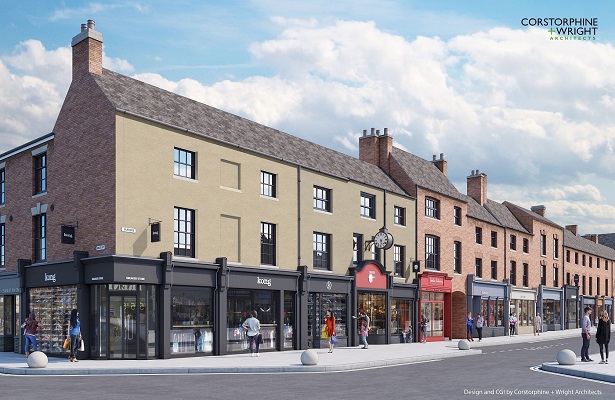 As high streets start re-opening all over the UK, a £2 million transformation of one of Coventry’s oldest shopping streets is underway to help revive the city and support business recovery after Coronavirus.

Behind the scaffolding, local specialist craftspeople Heron Consultants Ltd and Symon Construction and conservation architects at Corstorphine + Wright have been working to restore the historic fronts of the buildings and shops on the Burges and Hales Street.

Historic Coventry Trust (HCT) was given the major grant for the Burges and Hales Street by the Department for Digital, Culture Media & Sport (DCMS) as a demonstrator project for its £95 million High Streets Heritage Action Zone programme, led by Historic England.

Work started on site in February after HCT spent eight months working with the independent businesses and planning the scheme. The project is in partnership with Coventry City Council and Coventry BID and is part of the wider work to get the city ready to host UK City of Culture.

The exciting plans also involve opening up the River Sherbourne on Palmer Lane as a new public square, turning the river into an asset for residents and visitors.

Historically, The Burges was the main road running north from the old market place in Coventry’s city centre and its name, which was first documented in 1223, probably comes from “Between the Bridges”. At the north end of the street a bridge ran over the Radford Brook and to the south the River Sherbourne still runs under the Burges today.  In 1794 The Burges was widened and buildings on the eastern side of the street were rebuilt in brick, hiding earlier buildings behind the new facades.

Carol Pyrah, Executive Director of HCT which was set-up to acquire and restore Coventry’s heritage buildings to preserve them for future generations, said that re-imagining the UK’s high streets was needed more than ever since the Coronavirus pandemic.

She said: “The Burges is one of the few traditional high streets remaining in Coventry and it offers something different and unique because of the number of independent businesses.

“We know how difficult Coronavirus has been for high street businesses, so while everything has been closed our contractors have been working hard, with social distancing safeguards, to restore the buildings. The project will make this area a really attractive and different destination for shopping within the city, and we hope it will boost the businesses based there.

“The transformation will be revealed when the scaffolding comes down in autumn.  Attractive historic high streets are reinventing themselves all over the country and we’re delighted that Coventry is leading the way.”

Councillor Jim O’Boyle, Cabinet Member for Jobs and Regeneration at Coventry City Council, said: “The Burges is an integral part of Coventry City Centre, and I’m looking forward to seeing the latest aspect of its ongoing regeneration be revealed.

“I’m sure that Coventry’s shoppers will be eager to return to the area and support the thriving local and independent businesses that trade on the street, and see how the area’s unique heritage has been restored and preserved for generations to come.”

Louise Brennan, Historic England’s Regional Director for the Midlands, said: “The Burges is a fantastic part of Coventry’s city centre, full of independent businesses offering something special to shoppers.

“Historic England is delighted to be able to support this historic area with a significant grant which will allow the Historic Coventry Trust to work with owners to repair their buildings, reinstate lost historic detail and attract new uses.

“This investment is allowing the Burges area to recover from the impact of coronavirus and play an important role in recovery of the High Street. Historic Coventry Trust, Coventry City Council and the Coventry BID are leading the way in their approach to high street regeneration, and we are delighted to support their plans for the transformation of the look and feel of the area.”

Trish Willetts, BID Director, said: “The redevelopment of the Burges and Hale Street is another fantastic step forward for our great city, particularly for the independent businesses situated there.

“It’s no secret that these last few months have been tough on the retail landscape in so many ways, but it’s wonderful to see everything coming back to life again and truly highlights that we all have confidence in Coventry.”

Caption: CGI of The Burges