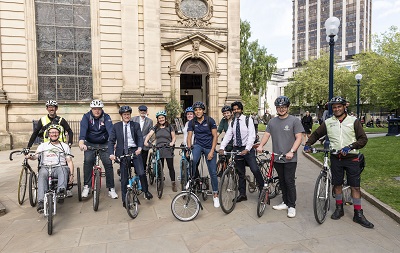 A £2 million fund set up to help communities improve their streets for cycling and walking has been inundated with more than 140 bids.

Better paths, improved street lighting, secure bike storage and on street car parking restrictions are among a range of ideas put forward by individuals and organisations hoping for support from the Better Streets Community Fund.

The fund, launched by Mayor of the West Midlands Andy Street in May, is designed to support small-scale projects that make it easier or safer to cycle and walk.

And ahead of national Cycle to Work Day, Transport for West Midlands (TfWM), which is part of the West Midlands Combined Authority (WMCA), can reveal that is has received 143 bids for funding.

These came from across the region, with six from Wolverhampton, seven from Solihull, nine from Walsall, 13 each from Coventry and Dudley, 15 from Sandwell and an incredible 80 from Birmingham.

Thy include better paths around parks, planters outside schools to stop cars parking on the pavements and requests to block rat runs to make streets safer for pedestrians.

Now Transport for West Midlands (TfWM) staff, working in partnership with local councils, will go through the bids carefully over the next few weeks and pick the best ones for funding.

Mayor Andy Street said: “As well as being great exercise and a fun way to explore the region, cycling and walking are crucial to reducing congestion and tackling climate change.

“However people often say there is something stopping them, such as cars blocking the pavement or a lack of a safe crossing, which is why we set up the Better Streets Community Fund.

“With that in mind I am delighted so many people and groups have come forward and applied for the fund, telling us what they think will make their neighbourhoods safer and ultimately encourage more people to get out on two wheels or their two feet.”

The Better Streets Community Fund was set up from the larger £23 million Transforming Cities Fund pot allocated to cycling and walking by the WMCA.

Cllr Ian Ward, WMCA portfolio holder for transport and leader of Birmingham City Council, added: “In Birmingham we have invested in cycle superhighways on the A34 and A38 to encourage more people to cycle on their commute to the city centre.

“But these community projects can equally make a huge difference to neighbourhoods in offering more incentives to people to leave their cars and get on their bikes or walk.”

Winning bids will be chosen from across the region and announced within the next three months.

All successful projects must be delivered within 24 months of being awarded funding. Some smaller projects will be earmarked for completion within six months.