£250m pipeline of investment into region’s town and city centres 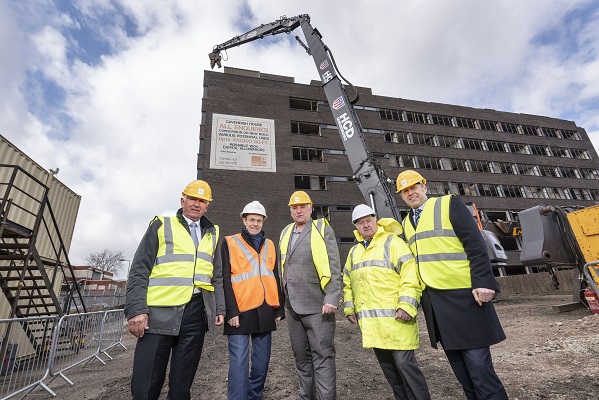 A pipeline of more than £250m of investment is being provided to help revitalise West Midlands town and city centres and kick-start their wider transformation.

The money is being deployed by the West Midlands Combined Authority (WMCA), working in partnership with local councils, to unlock sites for redevelopment and support different schemes that can regenerate centres and help reverse the fortunes of struggling high streets and deliver new homes and jobs.

Dudley town centre has became the latest to see the benefits of the £250m investment as a huge 90 ton “building muncher” began tearing down the eyesore Cavendish House which has stood empty and neglected for more than 20 years.

Watching the machine go into action and start the demolition, which is being paid for by the WMCA, were Mayor of the West Midlands Andy Street, Cllr Pat Harley, leader of Dudley Council and Cllr Mike Bird, WMCA portfolio holder for housing and land and leader of Walsall Council.

Joining them were Jon Bramwell, chair of the West Midlands Town Centre Taskforce (WMTCT), which was set up by the Mayor last year, and Jeremy Knight-Adams, owner of developers Avenbury Dudley which will deliver the wider £82m Portersfield development featuring retail, leisure and housing once Cavendish is taken down.

The Mayor also visited the Provision House Food Club – a concept to bridge the gap between food banks and high street supermarkets which has been launched with the help of WMCA town centre funding.

The demolition and social supermarket are part of a swathe of projects being invested in and delivered to fast track the regeneration and renewal of the region’s town and city centres.

The Mayor, a former managing director of retailer John Lewis, said: “High streets across the nation have been struggling as people choose to shop in a different way, turning to online retailers and home delivery.

“So, it’s vital our town and city centres reinvent themselves offering a more diverse mix of traditional retail, housing, leisure facilities and public services to create vibrant new hubs in our communities. That’s what the West Midlands is aiming to achieve with this comprehensive pipeline of investment.

“The demolition of Cavendish House and the Food Club are perfect examples of how the WMCA can help unlock regeneration of our towns and cities while also responding to the needs of our communities in the short-term, providing meaningful support to help the area prepare for growth.”

Cllr Harley added: “This is a momentous occasion which marks the start of a major regeneration plan which will transform Dudley. We have been talking about this for many years but at last we can say that Dudley is now in the midst of an exciting new chapter in its history. It’s our time and I am delighted this is all coming to fruition.”

The £250m of investment includes a number of bespoke packages of town centre and brownfield funding including:

The £250m also includes support for five town centres which have been put forward by their local councils for specific help – Bilston, Dudley, West Bromwich, Walsall and Bordesley Green in Birmingham.

The town centre programme is being co-ordinated by the region’s Town Centre Taskforce which is made up of prominent people from the worlds of retail, development, finance, housing, education and Government to work with local councils on moving forward redevelopment plans for town centres.

The new Food Club is a direct result of the work being carried out by the Taskforce and will provide a wide range of fresh food and daily essentials for the community to choose from, for a small weekly donation of £3. Run by local charity Loaves ‘N’ Fishes, the project will also provide healthy eating advice and recipes.

Taskforce chair, Jon Bramwell, a managing director at HSBC Commercial Banking, said; “The Taskforce is a positive example of how the private and public sector can work together to deliver vibrant, healthy and thriving town centres.

“This all starts with the local community. We hope the Food Club will demonstrate how spare spaces within our towns can be better utilised to meet the needs of the community whilst also creating spaces for social interaction and experiences.”

Cllr Mike Bird, leader of Walsall Council and WMCA portfolio holder for housing and regeneration, added: “The WMCA’s dedicated Taskforce and this £250m of investment provides much-needed support for town and city centres, many of which have experienced a decline in trade in recent years.

“Dudley is no exception but the demolition of Cavendish House, combined with softer interventions by the WMCA such as the food club we have seen today, will help kick-start the wider redevelopment of Dudley and breathe new life into the town.”