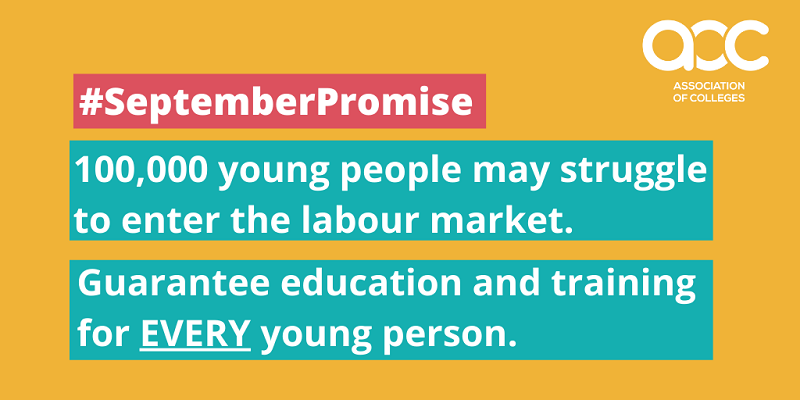 The Association of Colleges is predicting that half of the new labour market entrants (approximately 100,000 16 to 25 year olds) will struggle to find meaningful employment as the economic shocks of COVID19 continue to be felt.

For this year’s school and college leavers there are likely to be fewer job and apprenticeship opportunities and there will be major challenges in re-starting education and training after months of lockdown. In a depressed labour market, they will also be competing against recent graduates and more experienced staff who have lost their jobs.

AoC’s Chief Executive, David Hughes, has asked Gavin Williamson, Secretary of State for Education, calling on him to deliver a new ‘September Promise’ guaranteeing access to high quality education or training places this Autumn to every young person who wants one.

The Association of Colleges estimates that there are:

AoC is calling for this September Promise to particularly target those from low income families, and those who would normally be starting apprenticeships in September. There should also be a dedicated focus on ‘catch up’ to reduce the impact COVID19 is likely to have on achievement and attainment rates.

The aim is simple, to ensure that COVID-19 does not set young people back but that they are supported to become the generation that builds the UK’s future.

Other recommendations from the Association of Colleges include:

David Hughes, Chief Executive, Association of Colleges, said: “We know from previous recessions that disadvantaged young people disproportionately suffer, not just in the immediate aftermath of an economic downturn, but often for the rest of their lives. This is our chance to break that cycle for good. A ‘September Promise’ of high quality education and training would reduce the risk of long term economic scarring, and make sure that businesses have the skilled workforce needed to facilitate economic growth.

“Colleges across England educate and train 2.2 million people each year. They are uniquely placed at the heart of their communities, they have the facilities, the expertise and the enthusiasm to support this extra cohort of young people, they just need the investment from the government to make it happen.

“A September Promise would give hope to a generation of young people currently worried about their career prospects now and in the future. It will be they who rebuild the country after COVID19 but only if we put the support in place now.”

Marion Plant OBE, Principal and CEO of North Warwickshire and South Leicestershire College and chair of the Coventry and Warwickshire Local Enterprise Partnership (CWLEP) Productivity and Skills Business Group, said: “We know from talking to businesses that they want young people who have the skills they need to hit the ground running when they enter the workplace which is why campaigns such as this are vital for the future of young people and the business community.

“We see so many talented young people at our college every day and we want them to fulfil their promise despite this pandemic.

“We don’t want the skills of a generation of young people to be wasted which is why we support the September Promise.”