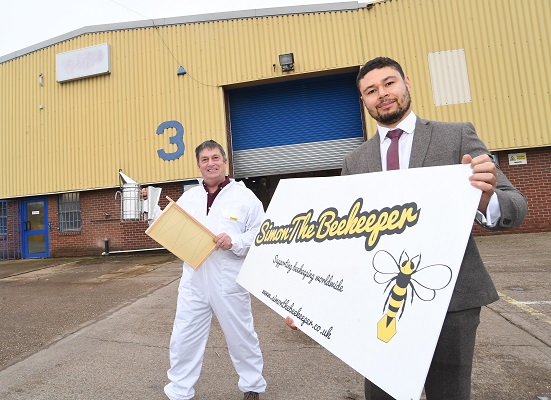 A buzzing online beekeeping business on target for a £2 million turnover has moved into new warehouse headquarters in Warwickshire to futureproof its expansion.

Simon The Beekeeper has taken on the lease of a 10,000 sq ft unit on the Centrovell Trading Estate in Nuneaton from The Wigley Group and from there aims to build on a 37 per cent growth achieved this year in its 10th anniversary.

The Wigley Group, which owns the trading estate on Caldwell Road, has refurbished the unit to meet the requirements of the business which included providing a more open space for stock storage.

The business was founded by Simon Morgan five years after he took up beekeeping as a hobby as part of his recuperation from a heart transplant due to a hereditary condition.

Simon, who had been a head of department at Leicester College, set out to play his part in a nationwide drive to save bees by reintroducing honeybees back into his village near Hinckley.

His admiration and respect for the vital role that bees play in the world’s ecology remains at the core of the business despite its growth.  It supplies over 400 products, from clothing and hives to honey-making and other equipment, to beekeepers predominantly in the UK, and in Europe and the rest of the world.

Simon, who now lives in Shropshire, said: “When I had my heart transplant, I decided I would never do anything that I didn’t want to do. The reason I started this was to encourage beekeepers to help the bees and supporting them remains at the core of what we do.

“I started the business in a spare bedroom ten years ago and it quickly took off and has escalated over the years which has now resulted in our fifth move.  We pride ourselves on our customer service of quick delivery at the best price.

“Our operations had become fragmented across a number of units in Leicestershire and so this year we decided to centralise again and move somewhere that could accommodate us for a few years to come.

“The Wigley Group’s unit at Centrovell is just what we wanted and the estates team has been really good in making specific alterations to make sure it was ready for when we moved in.  We plan to grow into the space and introduce a trade counter.

“We have a full-time team of six and will be recruiting locally for about a dozen pickers and packers ready for our peak season from March to June.  It’s an exciting milestone in our 10th year and as we target a growth in sales from £1.7 million to £2.2 million next year.”

The location of Centrovell Trading Estate, which is close to the heart of the region’s transport network, makes it an attractive site for warehousing and logistics.  A 7,400 sq ft unit is currently available through joint agents Bromwich Hardy and Avison Young.

Louis Smith, head of estates at The Wigley Group, said: “We are delighted to welcome Simon The Beekeeper to Centrovell Trading Estate and look forward to supporting the business with its expansion in the coming years.

“It’s always interesting to have a diverse range of tenants and a beekeeping business is certainly a first for us.  What started as a hobby has fast become a really successful environmental enterprise in helping to protect bees.”

Caption: Simon Morgan, owner of Simon the Beekeeper, and Louis Smith, head of estates at The Wigley Group.