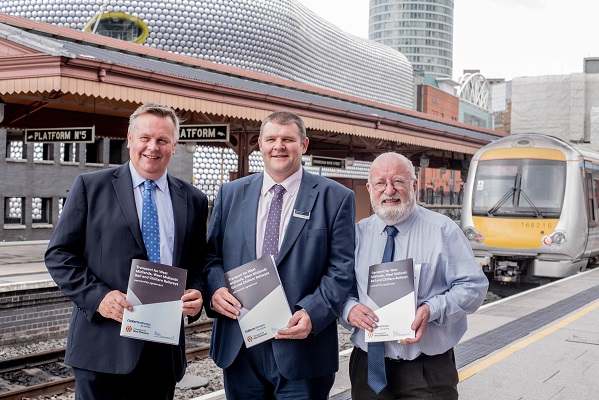 Rolling out the Swift smartcard and boosting ticket availability are just some of more than 100 target benefits for West Midlands rail passengers under a refreshed partnership deal.

They will work together to ensure customer benefits and investment are maximised in the region through 117 areas which it aims to deliver over the next three years.

They include fares and ticketing – delivering and expanding the Swift card on Chiltern services, a possible loyalty scheme product for the region, more ticket vending machines and increasing ways people can pay for their journey.

The agreement was signed at Moor Street station in Birmingham, the terminus for many Chiltern Railways services from London Marylebone.

It continues a partnership first signed between Chiltern Railways and former public transport body Centro in 2012.

This delivered major improvements in the region such as cycle parking at Dorridge station and a new car park at Solihull, faster journeys between Birmingham and London, and greater sharing of information about planned and unplanned disruption.

Dave Penney, managing director of Chiltern Railways, said: “I am delighted to renew this partnership with our colleagues at TfWM and WMR, continuing a relationship that serves the needs of our customers across a region that is vital to the UK economy.

“This is a hugely exciting time for rail in the West Midlands and Chiltern will be working closely with our colleagues in the region to deliver enhancements.

“In renewing this partnership, we are looking forward to playing our part in delivering key projects like Midlands Rail Hub and continuing to invest in our stations.

“We want to use our experience to ensure that the West Midlands’ rail network is resilient and can provide a high quality service whilst it is developed.

“We will provide a reliable and appealing travel offer to West Midlands passengers as HS2 takes shape and as work continues on Curzon Street - I firmly believe this partnership will serve that aim.”

Cllr Mark Winnington, the vice chair of WMR, said: “This agreement aims to deliver a new era for rail travel in the West Midlands.

“It will make train travel the most attractive mode of choice for people living in and travelling to and from the region.

“By working with TfWM and Chiltern we will deliver a network that plays a key role in making the West Midlands a place in which to do business, visit and live.”

Cllr Richard Worrall, chair of the WMCA’s Transport Delivery Committee, said: “The original agreement worked very well and we now take it on to the next level.

“We believe working with the rail industry to improve services is the right way to champion the needs of passengers across the region.

“Joint working between our organisations has already provided improvements for passengers, and we look forward to seeing more of the same.”

The agreement will be assessed against:

The new agreement will run until the end of Chiltern’s franchise in December 2021.