Blog: Nick Abell talks about his aims as interim chair during Covid-19 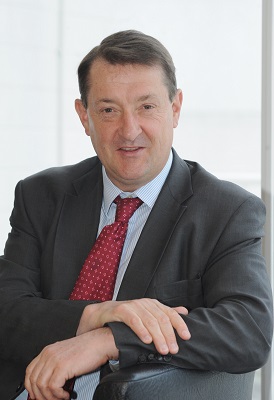 Nick Abell has been appointed interim chair of the Coventry and Warwickshire Local Enterprise Partnership (CWLEP).

Here, he talks about his career, his involvement with the CWLEP over the last eight years and his aims as interim chair during Covid-19.

“It is a privilege to have been appointed interim chair of the CWLEP even though it was unexpected!

“When Jonathan Browning announced he would be stepping down on April 1 as chair after six years at the helm, we started the recruitment process for his successor.

“In fact, we had three interviews lined-up and then the Government advised everyone should start working from home.

“I had a conversation with Jonathan and offered to step in as interim chair under these exceptional circumstances until we can appoint his successor. The offer was approved by the board.

“For those who are not familiar with me through my time in the legal sector, I have been a specialist in commercial real estate for my whole career.

“I qualified as a solicitor in 1982 and after working in the West End of London until 1986, I re-joined Wright Hassall in Leamington Spa.

“I was made a partner in 1988, and worked my way up to be senior partner, helping – along with a great team – to develop the company.  I stepped down from being a partner four years ago, and I have been chairman of Wright Hassall ever since.

“During my time with the company, we have grown from about 40 people to nearly 300 and we are a leading law firm in the region.

“It was eight years ago when I became a director of the CWLEP and since 2017, I have been vice-chair.

“I sit on the CWLEP’s Programme Delivery Board which monitors all the Local Growth Fund projects in the area to make sure they are being delivered on time and to budget.

“I have sat on that board along with Jonathan as chair and fellow board director Zamurad Hussain but I’m going to take over as chair now and we will appoint another private sector member of the main board to join us.

“I’m also chair of the CWLEP’s Finance & Governance Board but we will appoint another chair for this role since I don’t think it’s appropriate for me as interim chair to continue in this position.

“I’m also the CWLEP’s representative on the West Midlands Combined Authority’s Investment Board which ratifies all the public money which is being spent on projects in the region.

“As interim chair, I have to make sure the CWLEP is doing what we can both in terms of the projects we are already involved in and the Local Growth Fund schemes which are underway, since these need to be completed by March 31 next year.

“It’s business as usual as much as possible to ensure that we are hearing the concerns of companies during the Coronavirus outbreak and making sure we are in regular contact with central Government about how businesses can be helped so that the Government’s support is channelled in the right direction.

“I’m aware of all the fantastic work our Growth Hub is doing to support businesses with up-to-date information and advice and I’m also really impressed with the work of the Coventry and Warwickshire Chamber of Commerce since both organisations are working round-the-clock to ensure the needs of business are being met as much as possible.

“The impetus of the CWLEP since we were formed in 2011 has made a major difference to Coventry and Warwickshire’s economy, and a big factor has been bringing together all of our local authorities.

“The local authorities and borough and district councils are working together now more than ever with common aims and objectives and that is really, really important.

“That has really helped now we are faced with those difficult times as the channels of communications are very much open and those collective conversations between Coventry City Council, Warwickshire County Council and the borough and district councils in sharing intelligence are really important.

“We are feeding information back to Government all the time and I was the substitute for Tim Pile, the chair of the Greater Birmingham and Solihull LEP, on a conference call with the LEP Network this week.

“That gave LEPs the opportunity to express concerns about the fact funding has been stopped for apprenticeship providers, so the Government will now hopefully look at this again.

“On the Government call there was also concerns raised about the speed at which business support finance was reaching industry as well as the apprenticeship providers.

“We are incredibly fortunate at this time to be part of the West Midlands Combined Authority, because it gives our region a really loud voice through the Mayor and his office. Andy Street is always open to champion the needs of the whole of the Combined Authority geography and is a very powerful voice into Number 10.

“Another board I sit on as the CWLEP representative non-executive director is the UK Battery Industrialisation Centre (UKBIC). UKBIC is still due to open later this year which will transform battery research and development for the automotive sector.

“I’m also a trustee at the Elizabeth Creek Charitable Trust which is involved in supporting education and research in agriculture and horticulture and the Shakespeare Birthplace Trust which, alongside all major charities running and maintaining the nation’s rich heritage, is also facing unprecedented strains on its ability to do just that.

“So, my overall aim while Covid-19 remains, is to keep the members of the LEP talking to each other, ensuring our projects are progressed as much as possible so that they can resume as quickly as possible once we get the go ahead.

“We will keep making representations to Government to ensure the voice of businesses in Coventry and Warwickshire is heard at the highest level, and ensuring that those of us who run the businesses of this country have a real hand in shaping the economy and the landscape when everything returns to normal. It is certainly likely to be very different.”