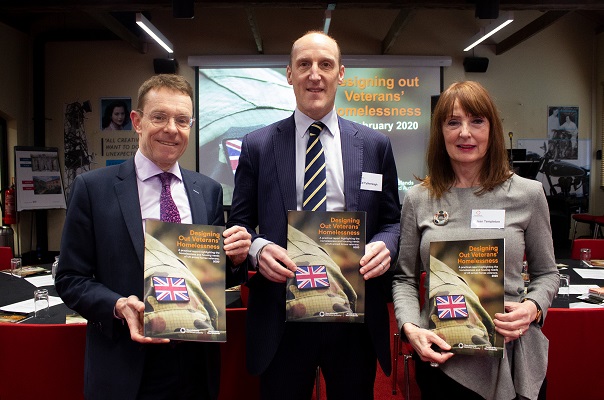 Andy Street, the Mayor of the West Midlands, has called for collaboration between sectors to support the region’s homeless ex-service men and women.

Cllr Yvonne Davies, WMCA portfolio lead for Public Service Reform & Social Economy and Leader of Sandwell Council, has also stressed the importance of working together and how it can make a significant difference.

The Mayor made the statement when he opened a conference today in Birmingham city centre (26 February), organised by the West Midlands Combined Authority (WMCA).

The WMCA brought together local authorities, homeless charities and armed forces organisations and charities, to highlight how they can work together to find the best ways to help veterans who don’t have permanent homes.

On his election in May 2017, the Mayor pledged to make tackling homelessness and rough sleeping a priority and one of his first actions was the creation of a Homelessness Task Force.

Speaking at the conference the Mayor said: “There are approximately 76,000 veterans living in the West Midlands who have made great sacrifices by courageously serving our country and region.

“But the transition from military to civilian life can be daunting, and, whilst most service leavers make a successful transition to civilian life, some do encounter difficulties. It is these veterans that I am keen that we as a region do more to support, ensuring that they get the right help at the right time.

“Working collaboratively across the West Midlands, we have the opportunity to improve the ways in which we identify and support veterans who are homeless or at risk of becoming homeless.”

At the conference a report, Designing Out Veterans’ Homelessness, was launched which examines the homelessness and housing needs of veterans.

Cllr Yvonne Davies, WMCA portfolio lead for Public Service Reform & Social Economy and leader of Sandwell Council said: “Homelessness is the ultimate exclusion. Access to good and trusted support at the right time can act as an important protective factor and the more we are able to keep people in our systems, the less likely they are to find themselves homeless.

“Bringing together the homelessness sector, service charities and the armed forces community can make a significant difference.

“This event, and the report, are important in highlighting where the system is not meeting needs and in starting the process of identifying how we as a region can develop a voluntary Commitment to Collaborate to prevent and relieve veterans’ homelessness.”

The study highlights examples of how ex-service men and women have been helped across the West Midlands including:

One of the speakers at the event, Ed Tytherleigh, chief executive of Stoll which provides supported housing to vulnerable veterans, and also the co-chair of the Cobseo Housing Cluster, said: “We can only end veterans’ homelessness if armed forces organisations and charities, local authorities and the homelessness sector work together to identify and support the minority of service leavers at risk of homelessness, so that everyone leaving the military has a pathway to a safe, suitable and secure home.

“We are delighted to be working with the West Midlands Homelessness Taskforce to achieve our joint ambition to ensure that veterans who are homeless, or at risk of homelessness are supported through to the services that will help them to achieve their full potential.”