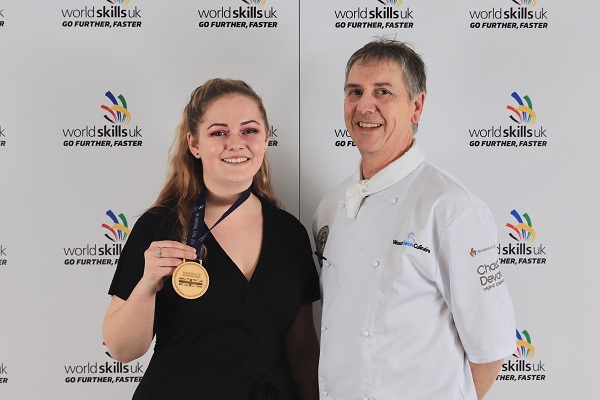 Students and alumni from North Warwickshire and South Leicestershire College are set to represent the UK on the world’s stage following their selection for Squad UK as part of the international WorldSkills competition. The talented trio will compete for the chance to represent the UK at the bi-annual event in Shanghai in 2021 known as the ‘Skills Olympics’.

Former student and Nuneaton chef Chloe Lloyd-Hughes will compete in the culinary arts category while former student Saskia Godley and current student Ellie Ruff are both due to take on challenges in visual merchandising. All three have been invited to join the prestigious WorldSkills UK Talent Development Programme after excelling in its national skills competitions, the finals of which were held in November at WorldSkills UK LIVE at the NEC in Birmingham.

The international WorldSkills competition in Shanghai will feature over 1,000 of the world’s most talented apprentices and students competing in over 50 different skills as they battle it out to be named the World Champion in their chosen skill.

Ben Blackledge, Deputy Chief Executive of WorldSkills UK said: “Congratulations to Chloe, Saskia and Ellie. This is a life-changing moment for them. All three have already excelled in the WorldSkills UK regional and national competitions and now they are facing an even tougher test as they look to secure their place to represent the UK on the world stage. They have already dedicated hundreds of hours to improving their skills to get to this level and have many months of hard work ahead of them with our training managers enabling them to transform their careers and lives.”

The trio will undertake an 18-month training programme with WorldSkills UK, supported by North Warwickshire and South Leicestershire College, and will face the ultimate selection test in Spring 2021 when the team that will compete at WorldSkills Shanghai is named.

Marion Plant, OBE FCGI, Principal and Chief Executive of North Warwickshire and South Leicestershire College, who is also deputy chair and trustee of WorldSkills, said: “This is fantastic news; we’re very proud of Chloe, Saskia and Ellie. Chloe and Saskia have already competed their qualifications with us and are now making their way successfully in their chosen industries. Ellie is doing extremely well on her current course and is on track to achieve her qualifications next year. We are sure that competing as part of Squad UK will provide all three with an unforgettable experience that will help them to grow and develop both personally and professionally.

“All three have benefited from some fantastic support from their tutors who consistently go the extra mile to help them practice and prepare themselves as well as they can. We believe that competitions are an excellent way of enabling students to practice real-world employability skills, inspiring them to get enthusiastic about their future career options. We wish all three Squad UK members the very best of luck as they work towards the chance of being named as part of the UK team heading to Shanghai in 2021.”

The previous WorldSkills Competition was in Kazan, Russia in 2019 where Team UK was awarded 19 medals. By taking part in the competition, WorldSkills UK identifies global best practice, research and insight that will help the new UK government to deliver world class standards in technical education.

Chloe Lloyd-Hughes aged 20 from Nuneaton successfully completed a Level 3 professional cookery qualification at the college’s Nuneaton Campus in June 2019 having progressed from Level 1. Chloe has already enjoyed success in WorldSkills picking up the Gold medal for culinary arts in 2018, securing a fast-track place to the UK finals in 2019.

Chloe maintains that competition experience is helpful for developing self-confidence and teamwork and enables her to build networks within the catering industry. Chloe currently works as a chef at the Sunnyside Inn in Nuneaton but has an ambition to work in a fine-dining restaurant in the future. She said that her tutors regularly gave up their time to help her train for competitions and provided her with many fantastic opportunities to gain experience and improve her skills.

On hearing that she had been selected for Squad UK, Chloe said, “It’s amazing news. I am so pleased because all my hard work has finally paid off. It would be a once in a lifetime experience to go to China and I am really looking forward to the challenge of trying to win a place in the UK team.”

Saskia Godley, 19, from Stoney Stanton has plans to set the world of retail alight having completed her course in graphic design last year. She said, “The facilities at the college were amazing and the tutors were knowledgeable and supportive. I have been lucky to be inspired with a career that provides so many potential opportunities. I was delighted to hear that I had secured a place in Squad UK and if I was selected to compete in China, I would be buzzing.”

Ellie Ruff, 17 from Nuneaton, a student of graphic design at the college’s creative arts Hinckley Campus, won a Silver medal at the WorldSkills UK LIVE competition at the NEC in Birmingham in November 2019. She said that coming to college was ‘the best choice ever’ and she is really enjoying her course. Ellie is keen to make a name for herself and wants to become a graphic designer after she has been to university. She believes that success in skills competitions will help her to secure a place at the university of her choice.

Ellie said, “I never thought that I would have an opportunity like this, and I plan to work really hard to try and make it to China. I have never been anywhere like that and it would be such an amazing experience.”