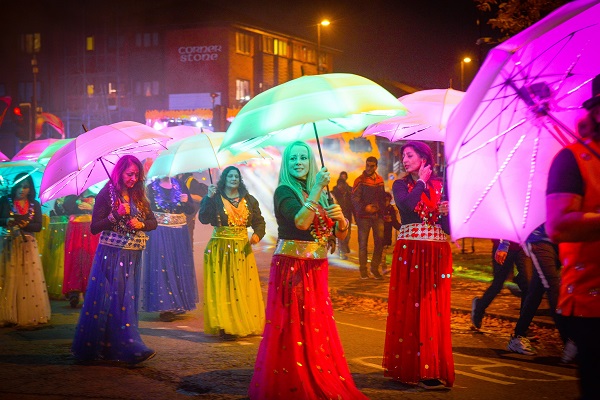 A whole community came out in force to be thrilled by a spectacular event in Coventry on Sunday.

Carnival of Lights, which was presented by the Coventry City of Culture Trust, and supported by Coventry City Council and Coventry BID, saw a feast of light, music and dance trail along Foleshill Road and into the city centre just after darkness fell.

Thousands of local people came out onto the streets to watch as the procession passed their homes and businesses and included a music float, dhol drummers, stilt-walkers, illuminated umbrellas, a beautiful lotus flower float, as well as 100 lanterns, while some watched from windows and doorways.

The lanterns were made with the local community at workshops in the run up to the event which were organised by artists from Foleshill Creates.

Carnival of Lights was part of Coventry City of Culture Trust’s programme of events in the run up to 2021 and forms part of a series of festive activities that the Trust is either organising or supporting this autumn and winter.

The Trust worked with Remarkable Productions, which is experienced in delivering similar events, as well as Coventry-based music producer, Sunit, who programmed a series of musical artists for the music float which got people dancing in the streets.

The carnival procession ended in Broadgate, where many had waited for it to arrive while hundreds of others had followed it along its route into the city centre.

Daksha Piparia, of Foleshill Creates, said: “We at Foleshill Creates were delighted to have been approached by the Coventry City of Culture Trust to work with the local community to create lanterns for the procession at the Carnival of Lights.

“The workshops at St Paul's Church and Foleshill Community Centre were really well attended, around 80 people in total, and for us it was particularly great that all sections of the community took part, all age groups and backgrounds.

“As you saw from the amazing lanterns on Sunday, there are some very talented local people in Coventry. Something very powerful happens when people come together to create art, we help create friendships and we give people a sense of belonging and community.”

One local resident who attended the event said: “It was very nice, we really enjoyed it. The lights were beautiful and there was lots of singing and dancing.

“People were enjoying it and loving it. There were lots of communities all out enjoying the event which is a great way of bringing people together.”

Chenine Bhathena, Creative Director of the Coventry City of Culture Trust, said: “This is what culture is all about. It’s about people coming out and enjoying themselves, coming together as communities and building real pride in their local area.

“It was great to see so many people enjoying one another’s company and culture.

“It all stemmed from a conversation with Councillor Ram Lakha, who wanted to hold a celebration at this time of year which was inspired by Diwali but that also include lots of other festivals that celebrate light as we head towards the winter.

“We wanted it to be fun and enjoyable, something that would bring people together, and looking at the way people were responding to the Carnival of Lights as we trailed along Foleshill Road, it really worked.”