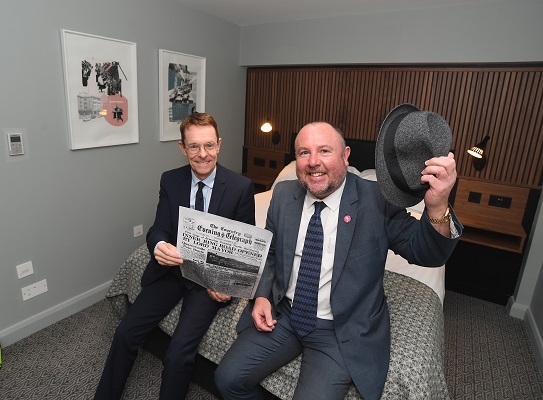 Connectivity, creativity and culture are the three concepts driving development across Coventry & Warwickshire – one of the most successful regions in the UK.

With a 1,000-year history, it arrives at MIPIM looking to the future as its development is being driven by the cutting-edge of technology.

Engineering expertise, combined with state-of-the-art research led by the area’s two internationally-renowned universities, has seen it emerge as a forerunner in the development of the next generation of EV and connected autonomous vehicles.

The area has in excess of £1bn of property for research and development and transport technology,either recently delivered or in development.

Work is also complete at the new UK Battery Industrialisation Centre which will see the development of the next generation of battery systems through a partnership between academia and industry.

The hi-tech facility near Coventry Airport has received £108m of central Government funding and recently won an £18million grant from the West Midlands Combined Authority (WMCA) to ensure it has the latest technology to attract leading manufacturers and R&D companies.

Elsewhere Geely LEVC’s facility was the first purpose built EV factory in the UK, while the new Williams F1  and Unipart JV Hyperbat will build the battery powerpack for the first all-electric Aston Martin.

As a global centre of future mobility, the area in pole position to attract one of the coming UK ‘gigafactories’.

Culture and creativity is proving a strong catalyst for investment as well. Coventry’s place as the UK City of Culture in 2021 will see two four-star hotels open before or during the year which will attract millions of visitors.

The 1950s former Coventry Telegraph building is being converted in to a boutique Mad Men-style hotel with restaurants and bars by Complex Development Projects, while Hotel Indigo is creating a 100-room hotel at Friargate adjacent to the city’s railway station, which itself is undergoing an £82 million redevelopment.

Those hotels will also profit from the area’s growing reputation as a home to major national and international events including the 2022 Commonwealth Games, Motofest, Interactive Futures and the Godiva Festival.

Coventry & Warwickshire is also home to one of the largest games development clusters in the UK with around 2,000 working in the sector in and around Leamington Spa – 10 per cent of the industry in the UK.

They will form a key part of the new Leamington Creative Quarter project, creating new office space, fusing the existing architecture with active public spaces, art and buildings to create a vibrant attraction for businesses, local people and visitors.

Coventry was also 2019 European City of Sport and this year, a 25-metre pool in a £36 million water park – The Wave – and a new £50 million University of Warwick Sport and Wellness Hub have opened.

Nuneaton celebrated the 2019 bi-centenary of the birth of writer George Eliot (Mary Ann Evan), revealing plans for a new £20m library and business centre, to add to other developments in the town as part of the Transforming Nuneaton Programme.