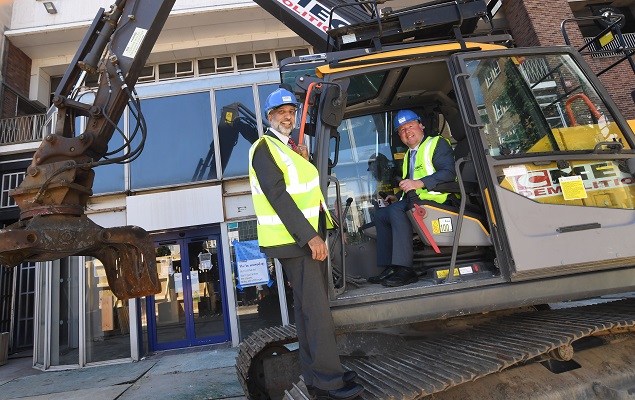 Bulldozers have started to demolish a former bank to re-open a link in a busy part of Coventry City Centre.

The £2.3 million project, which includes funding of £642,000 from the Coventry and Warwickshire Local Enterprise Partnership (CWLEP), has paved the way for the former Nationwide building to be dismantled as part of plans to re-establish the link between Broadgate and Hertford Street.

The first phase of the work will also involve removing the existing concrete pavement slabs by Nottingham-based CMEC Demolition and is due to be completed by the end of August 2018.

Work will then begin on the second phase to install new paving from Broadgate to Hertford Street as a continuation of the work already carried out in Broadgate which is expected to be finished by the end of 2018.

It will be the first time for 50 years the link from Broadgate to Hertford Street has been opened to the public and as part of preparatory work, Coventry City Council secured planning permission to remove the 1970s Nationwide building and return the Grade II listed Broadgate House building to its original design.

Cllr Jim O’Boyle, Cabinet Member for Jobs and Regeneration at Coventry City Council, and fellow CWLEP board director Zamurad Hussain pressed the button on the bulldozer to signify the start of the scheme.

Cllr O’Boyle said it was great the project was getting underway to restore the wide connection and open up the area.

“This work will restore Broadgate House to its former glory and Broadgate and Hertford Street will both benefit from the improved connection. It was my pleasure to officially start the demolition alongside Zamurad because I’ve been waiting for this day – and so have a lot of local people, many old enough to remember how it was originally,” he said.

“I know a lot of people will be pleased to see this work get underway. It also signals our intent to continue improving our city centre. And although I acknowledge there is a way to go, this is an important step forward.

“For the last five decades, the sculptures, called The People of Coventry, on the Hertford Street facing side of Broadgate House have been mainly obstructed from public view by the Nationwide building but that will all change with the figures back on full display again.

“I will be watching the demolition with interest and I’m really looking forward to seeing the improvements once they are completed.”

Zamurad Hussain, a board director at the Coventry and Warwickshire Local Enterprise Partnership, said developing this area of the city centre was good news ahead of Coventry being UK City of Culture in 2021.

“Coventry city centre is thriving once again and demolishing the Nationwide building and adding new paving along Broadgate Square and Hertford Street will revitalise this area as well,” he said.

“The hoardings around this area will now be put up while the work is carried out and once they come down, the work will start on transforming this part of the city centre near the Lady Godiva Clock.

“The CWLEP is part of the driving force behind economic growth in the region and revitalising this area will help to attract further business and visitors to the city centre.”

Caption: Zamurad Hussain from the CWLEP (left) with Cllr Jim O’Boyle at the start of the demolition work