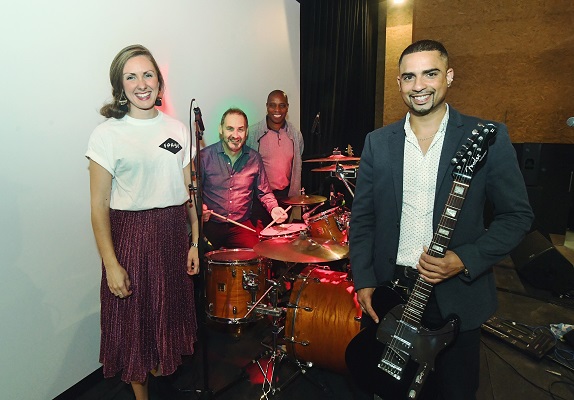 The manager of FarGo Village, Coventry's creative quarter for specialist shops, markets, studios, music and art, has praised entrepreneurs for surviving and thriving after the hub celebrated its fifth anniversary.

FarGo Village, on Far Gosford Street, opened in September 2014 and manager Emma Harrabin revealed that 22 of the Village’s start-up independent businesses are now at least three years old, with five of them having been with FarGo since its launch. In addition, 17 of the current on-site tenants have expanded since they opened their doors for business.

Emma was speaking at an event to mark the re-launch of FarGo Village’s live event space, The Box, which has undergone a huge transformation with support from Coventry City Council and Coventry and Warwickshire Local Enterprise Partnership.

Over the last nine months, work has been completed to create a new bar, four changing rooms and a production office back stage, a full audio visual and lighting package and a first-floor office space with ‘floating’ shipping container meeting rooms.

The re-launch also featured live music from The Lloyd McGrath Collective who are fronted by the son of former Coventry City star Lloyd McGrath, who bears the same name as his father. The band also recently supported The Specials at Coventry Cathedral.

The Box’s re-launch marked the start of a weekend of fifth birthday celebrations for FarGo Village, and Emma expressed her pride at helping the venue to flourish.

She said: “FarGo Village has established itself as one of the bright jewels in Coventry’s crown with an array of unique retailers and events on offer.

“We are particularly excited by the refurbishment of The Box. Over the past few years we’ve held everything from birthdays and film nights through to fashion shows and corporate events, but this refurbishment means we can attract a wider range of events to the venue.

“Lloyd McGrath junior also worked on The Box’s renovation, so we thought it was only right for him to finish the job by having him perform at the venue.

“The Box is now a state-of-the-art platform where Coventry’s performers can showcase their talent, just like The Lloyd McGrath Collective has done, and we believe it will play a key part alongside other venues in terms of helping the city to gear up for UK City of Culture in 2021.

“The success of the start-up businesses really shows just how well the community has embraced FarGo Village – each of them has carved out their own niche, and is the ideal place for those wanting an alternative shopping experience.”

Paula Deas, operations director at the Coventry and Warwickshire Local Enterprise Partnership, added: “As someone who grew up in Coventry, I know how much this area means to the people of the city and it is great to see it revitalised in this way.

“FarGo Village has been central to the growth of the region’s cultural and creative sector and the opening of the Box is certain to add another element with this performing arts and events venue and office space.

“We are keen to ensure funding from the CWLEP supports culture and tourism venues across Coventry and Warwickshire and it is fantastic to be part of the fifth anniversary of the award-winning FarGo Village.”