The first community projects to benefit from a £2 million fund set up by Transport for West Midlands (TfWM) to improve streets for cycling and walking have been announced.

Grants of between £10,000 and £180,000 from the Better Streets Community Fund (BSCF) will pay for a range of projects across the West Midlands including better paths, improved street lighting, secure bike storage and safe crossings.

Schools, community organisations and residents groups came up with ideas to make their streets safer and make it easier to cycle and walk. 34 of the applications for funding have been successful. 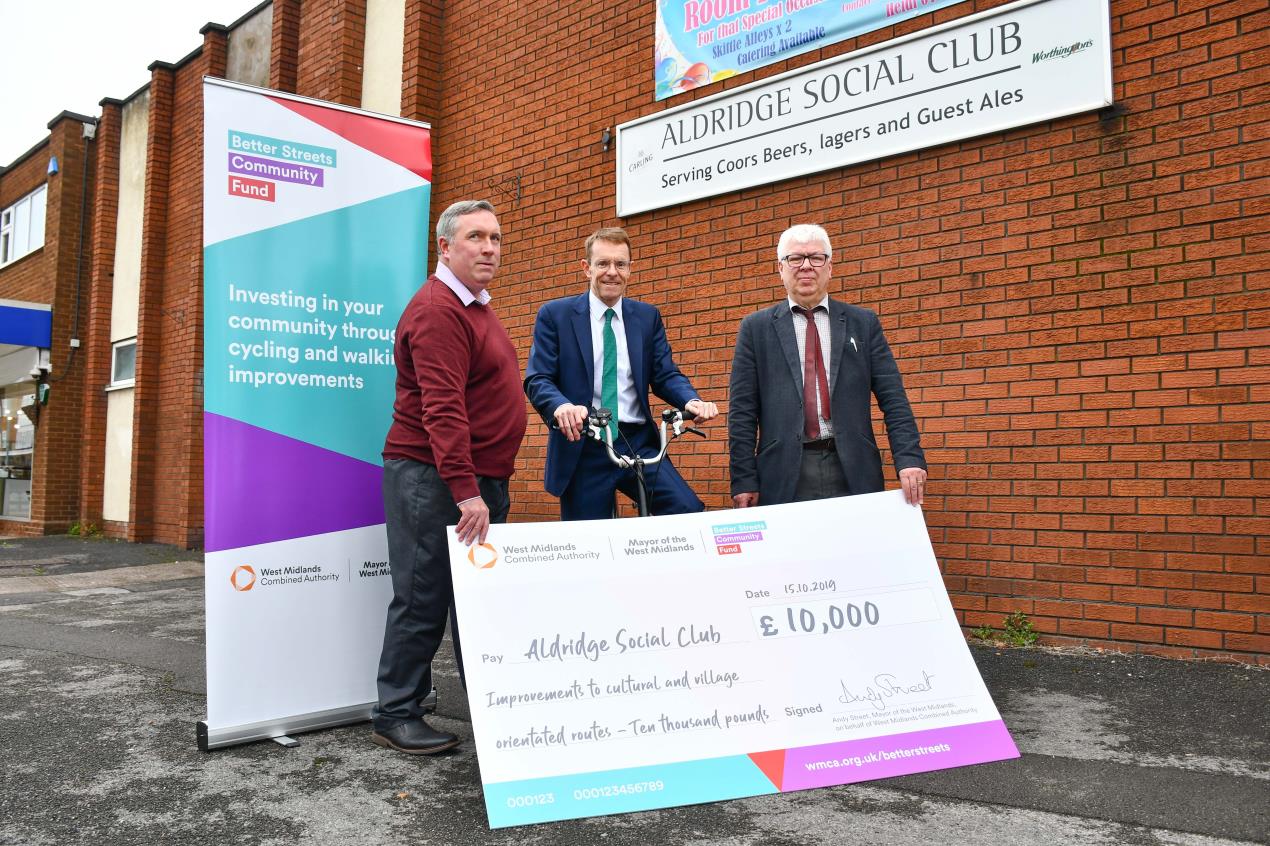 There are also several smaller projects including cycle racks, dropped kerbs at crossings and junctions and measures to prevent parking on the pavement outside schools.

Successful projects are expected to be complete over the next two years, with some of the smaller schemes to be ready within months. TfWM will work with local councils and the applications to deliver the schemes.

Mayor of the West Midlands Andy Street has visited Aldridge Social Club to hand over the £10,000 cheque following its successful bid for a cycle storage facility.

The Mayor said: “Cycling and walking are a key part of our plans to reduce traffic congestion and improve our environment which is why we have raised funding to £10 per head over the next two years.

“The Aldridge Social Club is one of many community groups that came forward with good ideas – with new cycle parking and signs they will encourage more groups to cycle around town. So we are delighted to be able to support them through the Better Streets Community Fund.”

The Better Streets Community Fund was set up in May from the larger £23 million Transforming Cities Fund pot allocated to cycling and walking by the West Midlands Combined Authority (WMCA).

Cllr Ian Ward, WMCA portfolio holder for transport and leader of Birmingham City Council, said: “These smaller projects, such as a pedestrian crossings, better pathways and measures to stop cars parking on pavements can make a real difference to a neighbourhood by encouraging more people to walk and cycle and making streets safer for children.

“As well as backing these smaller projects we are developing plans for more safe cycle routes for commuters across the region. Getting more people to cycle, either for their commute or for leisure, not only helps us tackle congestion but can improve our health too.”

West Midlands Cycling and Walking Ambassador Shanaze Reade said: “It’s fantastic to see the first set of brilliant projects that are going to benefit from the cycling and walking Better Streets Community Fund.

“I can’t wait to see the plans come together for cycle hubs, bike paths, better lighting and crossings to improve safety and bike storage to ultimately take away any barriers to people walking and cycling in the West Midlands.

“Thanks to all the community groups who’ve got involved to take advantage of the funding and I look forward to visiting some of the projects as they come together."