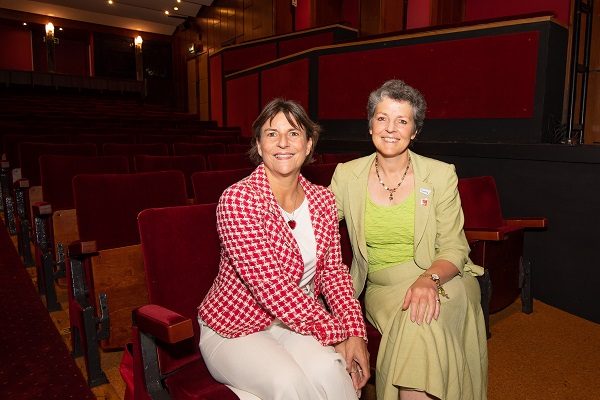 The next phase of exciting £4.8 million plans to transform Coventry’s Belgrade Theatre will begin in 2020.

The Main Stage Auditorium and foyers have been re-opened following extensive work this summer ahead of phase two to link the café and first floor Burbidge Room which will begin next summer.

The ambitious scheme at the Belgrade Theatre received funding from the Government’s Local Growth Fund through the Coventry and Warwickshire Local Enterprise Partnership (CWLEP).

It is part of the Completing the Culture Capital project which was a £2.4 million package of investment from the Local Growth Fund in key venues and production spaces which are essential for the successful delivery of Coventry being UK City of Culture in 2021.

The Theatre has secured the remaining money for its plans through Coventry City Council and the Department for Digital Culture, Media and Sport and is aiming to raise £600,000 from individuals, businesses and trusts by September 2020 through its Play Your Part fundraising campaign.

The refurbishment of the Main Stage Auditorium and public spaces has involved reupholstering and repainting all the seats, replacing the floors, cleaning and redecorating all the woodwork and refurbishing all the doors.

Phase two involves creating a new self-contained café bar with a new staircase which will be open to theatre and non-theatre visitors outside normal opening hours and will replace the existing café bar and former restaurant.

Joanna Reid, executive director at the Belgrade Theatre, said it was great to see the refurbishment taking shape.

She said: “This work will play a major part in the Theatre increasing its ability to earn more, which is vital for our long-term success.

“The refurbishment will give visitors from around the world – particularly when Coventry is UK City of Culture in 2021 – a much-improved experience as well as give the Theatre the opportunity to grow in a sector which is continuing to have a positive economic impact on the region.

“We are grateful for all the funding we have received so far and we would urge businesses who are interested in a wide range of sponsorship opportunities as part of our Play Your Part campaign to get in touch.”

“The culture and tourism sector is increasingly important to Coventry and Warwickshire’s economy since there are currently 40,000 people employed from the area in the industry which is growing more than twice as fast as the national average,” she said.

“This is a really exciting scheme taking place at the Belgrade Theatre and it is important we invest in the area to continue making it an attractive place to live and work.

“The Local Growth Fund was set-up by the Government to boost the economy and support businesses and this is a perfect example of a further growth opportunity for the region.”

Councillor George Duggins, Leader of Coventry City Council, said: “The Belgrade is a very important part of city life and has been now for over 60 years and we are delighted to have been able to support the refurbishment work.

“The Belgrade not only stages brilliant theatre, it runs the Theatre in Education project and classes for children and adults, as well as helping families through the Making Memories appeal.

“Now, as we build towards 2021 and our time as UK City of Culture, it is set to play a crucial role in helping our city deliver a year to remember. This work will make sure it is looking its best to welcome our thousands of visitors during that year and then continue gracing our city’s nightlife for many years to come.”

More information is available at: www.belgrade.co.uk/playyourpart