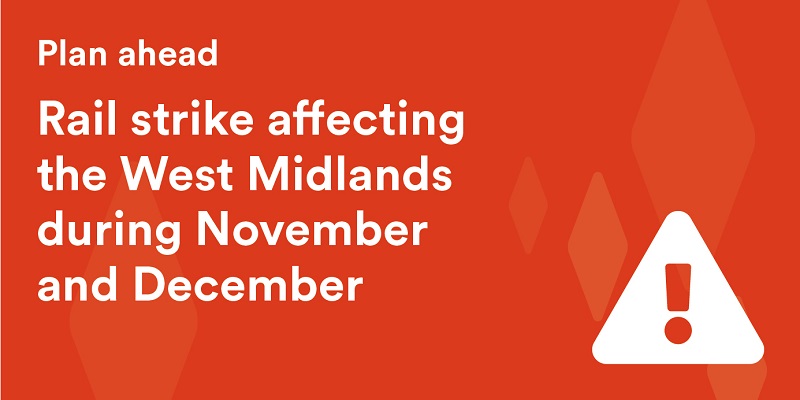 Strike action is due take place on West Midlands Railway (WMR) and London Northwestern Railway (LNR) services every Saturday in November and December.

This means WMR and LNR will be running a less frequent service than usual on strike days with a reduced number of trains per hour and not all stops being served.

It has been confirmed this morning that there will be rail replacement on the following lines:

On days when industrial action is taking place, the Transport for West Midlands (TfWM) Regional Transport Coordination Centre will be in operation to provide oversight of bus, Metro and train services. The centre will also monitor the road network during the action.

During the disruption West Midland Metro will accept WMR and LNR tickets on all services and will run two additional trams.

nNetwork ticket holders will be able to travel on any train and bus in the West Midlands during this time and National Express West Midlands are accepting all valid rail tickets.

Virgin Trains, Cross Country Trains, Chiltern Railway and Transport for Wales services are due to run a normal Saturday service but will be busier as people make their way to and from the Christmas Markets.

TfWM, part of the West Midlands Combined Authority, has issued the following advice to passengers travelling on a strike day:

* Plan ahead: Strike day timetables will be made available a few days before a strike day but could change last minute. Plan your journey based on current information but remember to check it again before you travel by using National Rail or by checking with your train operator.

* Leave more time for journeys: Don’t aim for the last train home, get there early and expect to queue.

* Consider your options: Other train companies are due to run a normal Saturday service but will be busier than usual. The West Midlands Metro and West Midlands bus networks re a good alternative to train if you are travelling between Wolverhampton and Birmingham and making local journeys.

* If you’re planning to go Christmas shopping or visit a Christmas Market: consider travelling into centres earlier and leaving earlier. The busiest time to travel around the West Midlands will be between 15:00-16:00.