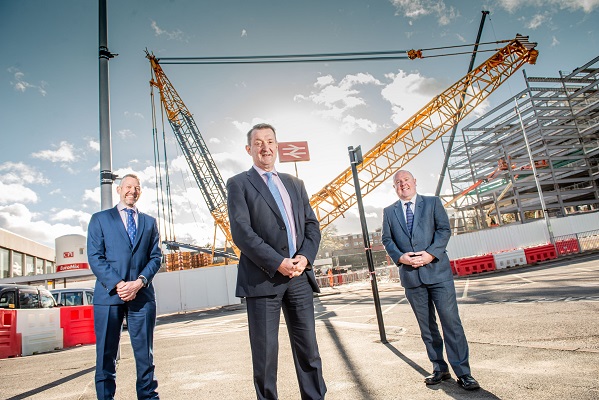 A massive crane has arrived at Coventry Railway Station to install a new footbridge to mark another significant milestone in the £82 million scheme.

The 750 tonne crane has been brought in to lift the footbridge into place which will span platforms one, two, three and four as part of the Coventry Station Masterplan project.

So that the installation of the crane can be carried out safely while no trains are running, the work will take place on Saturday evenings from 11pm to 7am on Sundays. Work will continue until Sunday, January 17, 2021. Once the installation is completed, the crane will be removed.

Pedestrian access to the station will be maintained with traffic marshals in place to help passengers reach the station, which will remain open throughout the work, with trains operating as usual during the day and evening.

The new footbridge will increase passenger numbers and will be connected to a new multi-storey car-park and a second entrance to Coventry Station via Warwick Road.

Coventry City Council is working in partnership with Network Rail, Avanti West Coast and other rail operators, Transport for West Midlands, Friargate JV Project Ltd and other stakeholders on the project which is on track to be completed by spring next year.

The Coventry Station Masterplan project is benefiting from a combination of £39.4 million from the West Midlands Combined Authority Devolution Deal, £27 million from the Government’s Local Growth Fund through the Coventry and Warwickshire Local Enterprise Partnership (CWLEP) and funds from Coventry City Council.

There will also be a new transport interchange connected directly to the new station building by an access tunnel under Warwick Road, highway improvements and public realm works to create a traffic-free boulevard from the front of the station to the city centre.

Councillor Jim O’Boyle, Cabinet Member for Jobs and Regeneration at Coventry City Council and CWLEP board director, said: “There is lots going on in the city centre at the moment with over £80 million being invested in projects that will create an important legacy for local people. At the station it’s clear to see that work is cracking on but the footbridge lift is a really important stage.

“I believe that we have one of the best arrival points in to any city in the UK by train – and this extension will give us a station building to match.

“The main station building is listed – but we will be combining the best of the old with the best of the new to ensure we have a station that works for visitors and which local people can be proud of.”

“COVID-19 is presenting a whole raft of challenges but the investment that is underway now will help us to be in the strongest position possible as we emerge out of the other end.

Nick Abell, chair of the CWLEP, said this was an important piece in the jigsaw to create a much-improved railway station in Coventry.

He said: “The crane is set to dominate Coventry’s skyline for a few weeks as the new footbridge is lifted into place in the next crucial stage of the scheme.

“The footbridge and lifts will complement the existing station and create additional capacity to accommodate significantly higher numbers of passengers.

“The previous footbridge was no longer adequate for one of the fastest-growing stations outside London and, once complete, this will provide an impressive new gateway to visitors arriving in Coventry.

“That is particularly important as we countdown to Coventry being UK City of Culture and the Birmingham 2022 Commonwealth Games.”

Andy Street, the Mayor of the West Midlands, said: “The West Midlands Combined Authority is committed to helping redevelop Coventry City Centre alongside our partners, and we are investing a lot of money to help make that happen.

“The £40million for the redevelopment of Coventry rail station is a prime example of that, and it is brilliant to see the project taking shape in front of our eyes. Not only will the new station help create a fitting gateway into the city, but it is also a significant economic boost at this difficult time, helping to guarantee work for the construction sector, which in turn helps to both create and protect local jobs.

“As well as the new station, the WMCA is also the single-biggest investor in City of Culture with £35 million committed, and we are also leading on the project to redevelop Pool Meadow bus station."