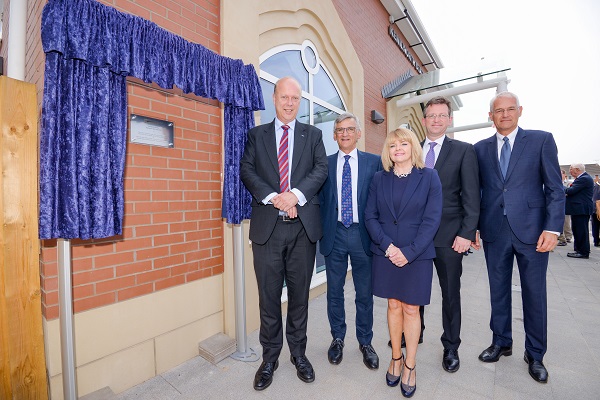 A plaque to mark the official opening of Kenilworth Station has been officially unveiled by the Secretary of State for Transport, the Right Honourable Chris Grayling MP.

Mr Grayling was joined by the MP for Kenilworth and Southam, Rt Hon Jeremy Wright and Cllr Peter Butlin and Monica Fogarty from Warwickshire County Council to unveil the plaque and to pay tribute to all of the partners in the scheme who had made it possible, with representatives from Coventry and Warwickshire Local Enterprise Partnership, Network Rail, West Midlands Trains and West Midlands Rail all present.

After over 50 years without a station following the closure of the original building in 1965, the new Kenilworth Station opened in April with many of the aspects of the original design incorporated into its design. The hourly service from Coventry to Leamington now alights at Kenilworth.

The project to build the station was funded by Warwickshire County Council, the Government’s Local Growth Fund through Coventry and Warwickshire Local Enterprise Partnership (LEP), and from the Department for Transport’s New Stations Fund.

Cllr Jeff Clarke, WCC portfolio holder for transport and planning, said:  "The county council is committed to ensuring Warwickshire has the right infrastructure to continue its economic growth and transport links are absolutely critical to this strategy. Kenilworth Station is key to this and we are pleased that the town has a station again and that residents have responded so positively to it."

“Part of this record level of investment involves the re-opening of stations and lines that were axed during the notorious Beeching cuts over 50 years ago. The new station at Kenilworth replaces one that was demolished in the 1960s and is now providing passengers with a valuable new connection between Coventry and Leamington”.

Rt Honourable MP for Kenilworth and Southam, Jeremy Wright MP:  The formal opening of Kenilworth’s new station is another moment to recognise the hard work of many in bringing it about. The station is already making a positive difference to the town and I have no doubt it will continue to do so.

Jonathan Browning, chair of the Coventry and Warwickshire Local Enterprise Partnership, said: “The Local Growth Fund gives the LEPs the opportunity to progress transport schemes which will improve connections with other towns and cities and tackle congestion. Kenilworth fits all those criteria and we are delighted the financial support we were able to provide has made the creation of the station possible.

“The station is already proving a very useful link between Leamington and Coventry and that will only increase as services are added and it becomes a greater part of people’s day-to-day travel.”

Brenda Lawrence, Head of Stations for West Midlands Railway, said: "Kenilworth is the first new station to be opened by West Midlands Trains, delivering popular new journey opportunities for the local area.  Further improvements to our services are also planned for the future with new trains and better connections across our network. Today is about thanking our partners for their part in bringing Kenilworth station to fruition and reinforcing our commitment to supporting the progress and prosperity of the communities we serve."

Martin Frobisher, route managing director for Network Rail, said: “Kenilworth station is an excellent addition to the rail network which provides local people with much-needed trains to Coventry, Leamington Spa and beyond. Our Railway Upgrade Plan means better services for passengers and we will continue to work with our partners to deliver it.”

Cllr Roger Lawrence, Chair of the West Midlands Rail Executive, said: ‘The next few years are going to see a transformation for rail in the West Midlands, and I am really pleased that it is starting here at Kenilworth. The new station not only looks great, but is also providing the capacity needed for the region’s growth in the future, connecting communities, businesses and people to jobs.’”