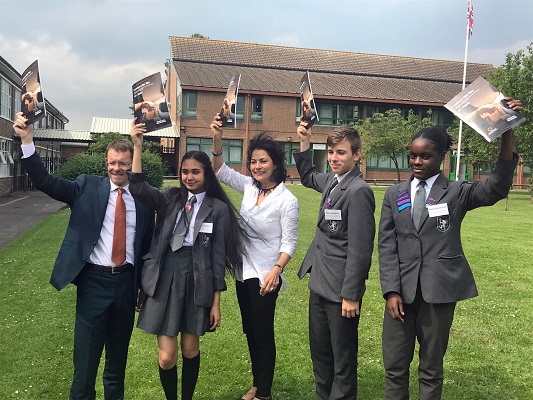 The lack of diversity at the very top of major companies and public bodies risks damaging the region’s economy and wider society, Mayor of the West Midlands Andy Street warned today.

He said the leadership of private and public sector organisations needed to better reflect the diverse nature of the West Midlands so that talent and important perspectives were not sidelined or ignored.

The Mayor urged organisations to embrace a series of recommendations set out in a new study commissioned by the West Midlands Combined Authority (WMCA) to look at ways to improve opportunities for people from under-represented parts of society.

The West Midlands Leadership Commission, chaired by journalist Anita Bhalla, has spent nine months reaching out into communities and institutions to give a voice to the views, real-life experiences and ideas of people across the region.

The Commission’s report – Leaders Like You - has focused on the experiences of black and ethnic minority communities, women, the LGBT community, disabled people and lower social economic groups such as white working-class boys.

Among the recommendations is a call for existing leaders to ensure diversity in their workplaces, identify talent and then mentor and coach that talent to produce future leaders.

The Mayor said: “It’s not acceptable that certain parts of society are largely invisible when you look at the leadership of our major institutions and companies.

“The diversity of our region is one of our greatest assets but this lack of representation at leadership level can lead to a sense of alienation amongst certain groups and a feeling that it is not possible to get to the top.

“Yet greater diversity in leadership can bring fresh talent and alternative ways of looking at an increasingly globalised world and that can generate greater prosperity and less marginalisation and disaffection amongst excluded groups.

“So I echo the Commission’s call for existing leaders to take on board the findings and recommendations of this report, think about what difference their actions can make and help the West Midlands become a place where everyone can fulfil their potential.”

The West Midlands Leadership Commission is made up of 19 role models who have succeeded in the worlds of business, the arts, health and public services and who personally understand the issues of under-representation.

Their report was presented at the ‘Leaders Like You’ conference at Great Barr Academy in Birmingham which was attended by members of the Commission, students from the academy and senior figures from the private and public sector.

The event featured a video message of endorsement from Prime Minister Theresa May (available here at https://www.youtube.com/watch?v=DbOTidXxjqw&feature=youtu.be) and a video montage of Anita talking about diversity at leadership level and students talking about their dreams and aspirations (available here at https://www.youtube.com/watch?v=kEwUIQfcoM8&feature=youtu.be).

The report has been shaped by strong academic input from the universities of Birmingham, Wolverhampton, Birmingham City, Warwick and Coventry. The work was pulled together by the University of Birmingham’s IRiS (Institute for Research into Superdiversity),

It found that while the West Midlands has a better rate than many other regions in the adoption of equal opportunity policies and practices more needed to be done.

While women tend to be better represented at leadership level in the West Midlands public sector, particularly the NHS, they are poorly represented in leadership positions within the education sector and female directors of large, private sector companies are a “rare sight”.

·        People with disabilities are underrepresented across the board and suffer a lack of job security, personal development and perceived capacity to lead

·        The proportion of BAME people in the workforce is significantly lower than the local working age population, hampered by a lack of role models, an understanding of cultural differences and a backdrop of institutional and societal prejudice

·        The LGBT community is held back by a lack of confidence, a need to conform to stereotypical machismo, banter and language which should be considered homophobic and exclusionary

Anita, who is also chair of PBL Town Hall and Symphony Hall, said: “It’s not good enough to say that HR policies are in place if those policies are not rooted in an organisation’s culture.

“There needs to be ownership of this issue at the very highest level. Leaders need to build diversity into their workforce so they are able to produce future leaders through mentoring and coaching.

“We found that consciously, or sub-consciously, there is a tendency for people to recruit and promote in their own image and at worst there can be nepotism and a ‘mates club’ mentality.

“To break this cycle we need those attitudes to change and we believe this is the start of a long overdue journey.”

Anita said the region had an exciting opportunity to rapidly grow economically but would be held back if it did not tackle the lack of diversity in leadership roles from people of all backgrounds.

“There needs to be a determination to put into place actions which not only embrace it as a concept but adopt it in all of our societal and political decisions - this needs to happen in our streets and neighbourhoods as well as our public and private institutions,” she added.

Cllr Steve Eling, leader of Sandwell Council and the WMCA’s portfolio holder for cohesion, inclusion and public service reform, added: “We have a young and incredibly diverse population for which we need to ensure there are opportunities to grow and flourish.

“But we want change to be sustainable and not just about meeting ‘quotas’ to deliver diversity.

“This is not a new issue, but it is a critical one. Inclusive growth means using diversity as an asset – but what the Leadership Commission makes clear is that we will need a step change in practice to get there.”

The report has also been endorsed by trade unions. Lee Barron, the TUC’s Midlands Regional Secretary, said: “Organisations need to plan for their future leadership and we need that leadership to look like the people they represent.

“It’s vital that we give people from underrepresented groups the confidence to succeed. Leaders need to look long and hard in the mirror and if that image doesn’t reflect our wider society then we need to change.

“I welcome this report because it starts that journey and I would urge leaders to consider it carefully and take action.”

In addition to mentoring and coaching talent from within, the report also recommends:

·        The WMCA leads by example and act on an ambitious plan to bring more diverse leaders into its own organisation, networks and governance