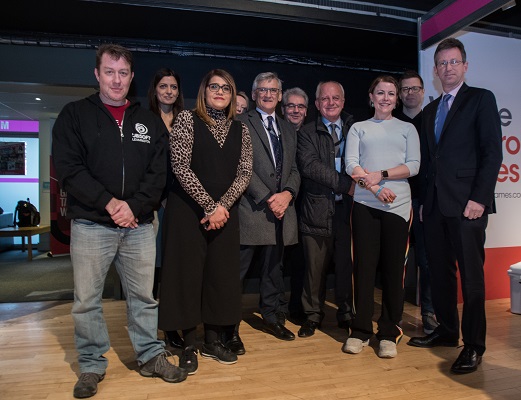 The three-day event from 31 January to 1 February brought together the leading lights of the UK and international games industry to the Silicon Spa for a combined conference, workshops, talks and exhibition to showcase the latest developments and career opportunities in one of the world’s fastest growing sectors.

The event was co-organised by Warwick District Council and Warwickshire County Council, supported by CWLEP. Each authority plays a significant role in attracting and retaining games industry businesses to the area. Alongside the festival was a conference hosted at Royal Leamington Spa College which attracted a wealth of academics from universities as far afield as Istanbul.

Such was the popularity of Interactive Futures, an industry first, not only from games specialists but from the local community too, that the dates and headline speakers for next year’s event have already been announced.

The Leader of Warwick District Council Cllr Andrew Mobbs commented: "I’m extremely proud that we have brought this completely unique event to Leamington Spa and that following the success of last week, Interactive Futures is here to stay. We are very much looking forward to welcoming and inspiring even more creative talent in 2020.“

Cllr Peter Butlin, Deputy Leader and portfolio holder for finance at Warwickshire County Council, said: "Interactive Futures provided an excellent opportunity to showcase the world-class gaming talent we have here in Warwickshire and puts Silicon Spa on the map as a destination to set up new businesses in the area.

"We are proud to be the home of Silicon Spa, which plays a key role in our thriving economy and it is events like these that help to inspire many young people and show them the career opportunities available to them in the county."

Parveen Rai, Director of the Coventry and Warwickshire Local Enterprise Partnership, said: “This event has given us the perfect opportunity to showcase the innovative and growing video game companies which are based in the region working on some of the world’s leading games.

“We have been really proud to work alongside local industry on developing this event. It was really important to all involved that it was not only an event for anyone currently working within the industry, but to develop a meaningful programme which focuses on developing the future pipeline of talent.

“To have this industry-leading event returning to the area next year reinforces that Leamington is the place to be for a career in video games, whether you are already in it or just starting out.”

Steve Taylor, WCG Dean of Higher Educations, said: “The Interactive Futures academic conference held at Leamington College was a fantastic opportunity for academics and industry experts to share their insights and research together in the heart of 'Silicon Spa'.

“With presentations ranging from historical perspectives on play and serious gaming, to applied gamification of education, health, and society, the conference once again confirmed the College's role at the forefront of research-informed teaching and academic debate."

Chris White, WCG President and Director of Institute for Industrial Strategy, King’s College, London, said: “I was delighted to be invited to open the inaugural ‘Interactive Futures’ conference at WCG’s Leamington Spa campus. The Games industry plays an increasingly important role in Leamington, and this event showcased not only the potential it has for the local economy, but also how business and the College can collaborate to provide a gateway for students into the industry."

Interactive Futures 2020 will take place at the Royal Spa Centre from 30th January to 1st February. The festival will feature on Channel 5’s Gadget Show to be broadcast in March.