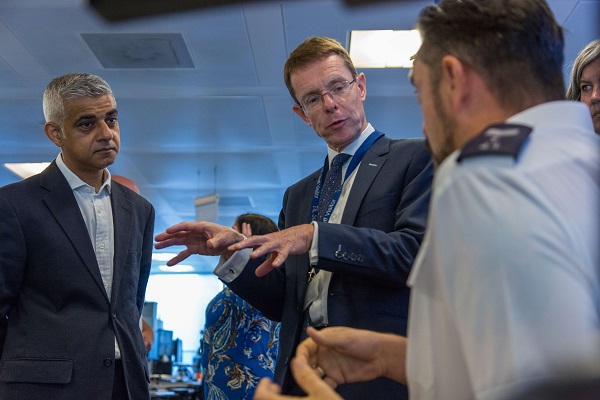 Lessons learned from major incidents and ways of limiting disruption to large-scale transport projects are to be shared between the West Midlands and London.

The Memorandum of Understanding signed by Transport for London (TfL) and Transport for West Midlands (TfWM), part of the West Midlands Combined Authority (WMCA), is the first time two devolved local authorities have made a commitment to share best practice and work towards common goals.

The knowledge-sharing agreement will enable the two to learn from each other to improve not only their individual regions but also the rest of the UK.

At an event on Tuesday, July 18, in London’s Traffic Control Centre, both Mayors met staff who monitor the capital’s road network 24 hours a day.

As well as seeing how the capital uses state-of-the-art traffic signal technology to monitor and reduce congestion the Mayors also saw how the control centre is used to coordinate major sporting events, such as the London Marathon and RideLondon, ensuring swift responses to any incidents or congestion.

With Coventry already planning a range of exciting outdoor activities as the UK City of Culture 2021 and Birmingham hosting the Commonwealth Games in 2022, as well as being in talks to host the UK round of the Formula-E, it is hoped that working together to share knowledge and experience on developing customer information will ensure all these events are as successful as the London 2012 Games.

The agreement covers a range of areas in which both organisations believe they could benefit from working together.

Sadiq Khan, Mayor of London, said: “London and Birmingham face many of the same challenges so I am delighted that the signing of this agreement further strengthens our commitment to work together.

“Among other things, sharing information will help us better deal with major incidents, manage world-class sporting events and reduce congestion, improving our cities for everyone.”

Mayor of the West Midlands Andy Street said: “In the next few years the West Midlands will be playing host to huge events requiring us to be at the top of our game in terms of managing transport, particularly on our public transport networks.

“Transport for London has a wealth of experience in accommodating extra travellers and we’re keen to tap into this knowledge ahead of the Commonwealth Games and Coventry City of Culture.

“This Memorandum of Understanding is an important first step in making sure all future events are remembered for the show the West Midlands puts on, not for any challenges the transport networks might face.”

Gareth Powell, managing director for Surface Transport at TfL said: “This agreement will see us share our experience from the last two decades as an integrated transport authority while learning a range of new skills and ideas from the West Midlands.

“We can also work together on developing and delivering common policies, like improving air quality and reducing the impact of major transport projects on local residents and businesses, which will benefit the UK more widely by boosting connectivity in every region.”

Last month, all eight regional and city-wide Mayors – four Conservative and four Labour – met in Liverpool and called on the government for greater devolution of powers and funding over skills.

At the meeting they signed a joint statement calling for further reforms to the skills system, including more control over Apprenticeship Levy funds to boost skills in their areas.

Following the meeting a delegation from TfL will be visiting Birmingham later in the summer to discuss how both organisations can work with the freight industry and its customers in the business community to help minimise the impact of major events and construction work.