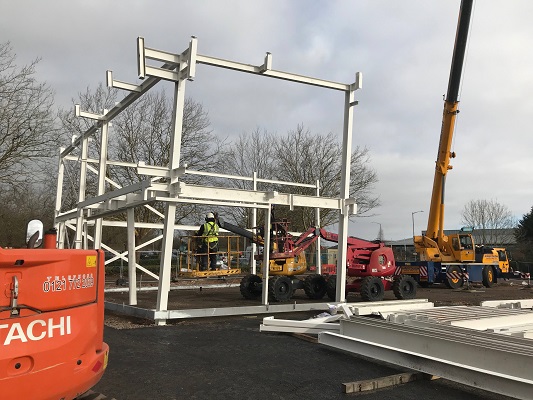 Construction of an impressive new £2.5 million Midlands headquarters for ambitious main contractor MCS Group has reached a major milestone with the erection of the steel frame.

The construction company will begin an exciting new era later this year when it moves into its new HQ at the Opus 40 site in Haywood Road, Warwick.

Currently based in Claverdon, Warwickshire, the company is building its state-of-the-art 8,500 sq ft HQ as it enjoys a period of sustained growth in delivering projects across the industrial, storage and distribution sector.

The move will support staff by relocating close to the centre of Warwick, where they will have access to local amenities including day care, schools, surgeries and shops, and a greater range of housing types.

MCS will be showcasing the project at MIPIM – the world’s largest property development and investment show.

The company is a member of the Coventry & Warwickshire MIPIM Partnership which is made up of around 20 private sector companies and organisations who promote the area’s presence at the four-day event as part of the UK Midlands.

Keir Edmonds, who established the company 15 years ago, said: "We’re making great progress on our new offices at Warwick and it’s exciting to see the steel frame go up and the building begin to take shape.

“This is a major investment in the future of our business and our workforce, and is a clear statement of intent - demonstrating how ambitious we are to grow by delivering projects of the highest quality. Our new offices will allow us to showcase our expertise in commercial construction whilst providing a gateway statement headquarters building on to the Opus 40 site.”

Founded in 2003, the company was first based at Stoneleigh Deer Park, now Abbey Park, before relocating to its current base at Claverdon. Jobs will be created once the new HQ reaches completion, taking the workforce to over 75.

MCS Group has set itself a target of doubling its current turnover to around £200 million by 2020 and significantly increasing profits. Key clients include developers Chancerygate, Opus Land and Richardson. It is currently constructing warehouse units across the UK and has recently won contracts in Swindon, Kettering, Hatfield and Bristol. The company has built and refurbished more than 300 car dealerships including Audi, BMW, Mclaren and Jaguar Land Rover.

Caption: The steel frame has been erected as the construction of MCS Group's new headquarters in Warwick continues to make good progress