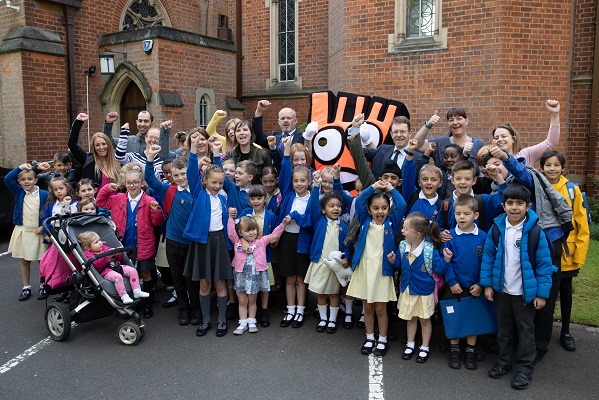 Thousands of parents are ditching the car and walking their children to school in the West Midlands thanks to a national charity’s campaign.

Latest figures show that the walking rates among children at the region’s schools signed up to Living Streets’ WOW challenge have soared by more than 35%.

Now more schools across the region are being urged to sign up to WOW – the year-round walk to school challenge from Living Streets, the UK charity for everyday walking.

Switching from car to walking on the daily school run reduces congestion around the school gates, improving road safety and air quality, while ensuring children fit more active minutes into their day.

The scheme has been adopted at 55 schools across the region and is backed by Transport for West Midlands (TfWM), part of the West Midlands Combined Authority (WMCA).

Andy Street, the Mayor of the West Midlands and chair of the WMCA, said: “Getting children to walk to school is key to not only improving the health of our region’s youngsters but also in helping to tackle climate change.

“Air pollution is the biggest factor in climate change in the region, and so the more people we can encourage to take alternative modes of transport – like walking and cycling – the better.

“As well as the green benefits, walking to school also eases congestion and helps increase activity and promote a healthy lifestyle for our children.

“It is great to see that Living Streets’ WOW challenge has made such a difference, with a 35% upturn in the number of children walking to school.

“However it is now time to get more schools signed up to the scheme and more children using their two feet rather than four wheels.”

As part of the challenge, Mr Street recently returned to his former school, Langley Primary in Solihull, to walk with the children.

He added: “It was fantastic to be made so welcome by my old school to see how they are getting on.

“The children have responded enthusiastically to the challenge. So many are now walking, cycling and scooting and are clearly happier and healthier as a result.”

In the West Midlands, 14,000 pupils in 55 schools have taken part in the WOW challenge so far and walking rates have risen from a baseline of 47 per cent to 83 per cent.

At the same time car journeys from the front door to the school gates have fallen from 38 per cent to 26 per cent at WOW challenge schools.

“Walking to school is a positive action families can take in the fight to clean up our air. We’re thrilled that so many families in the West Midlands have been swapping the school run for a school walk and we're seeing healthier and happier children as a result.

“I can’t think of a better incentive than that for other schools to get involved with WOW – our year-round walk to school challenge.”