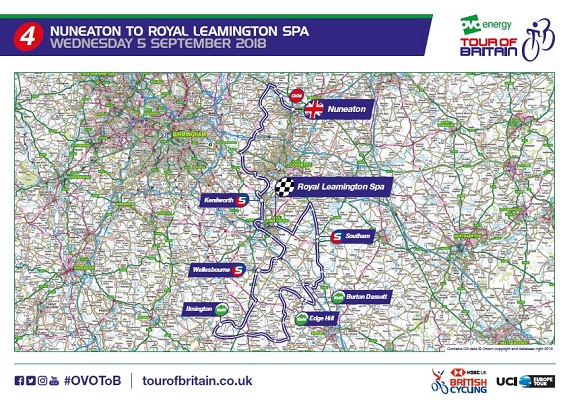 Motorists are being advised of a number of road closures ahead of the OVO Energy Tour of Britain.

The world’s top male cyclists will be coming to Warwickshire for the prestigious road race on Wednesday, September 5.

Starting in Nuneaton at 11am, it will visit all five districts of the county before coming to an end in Royal Leamington Spa.

This will mean that there will be a number of roads along the route that will be closed throughout the day or temporarily, as well as parking restrictions.

Councillor Izzi Seccombe, leader of Warwickshire County Council, urged residents to make sure they know what roads are going to be affected on the day.

“Hosting the OVO Energy Tour of Britain for the first time marks another fantastic achievement for Warwickshire. It is such a great event that all of our towns, villages and communities can get involved with and get behind and a wonderful opportunity to showcase all that Warwickshire has to offer from its towns to its countryside to a global audience,” she said.

“It would be great to channel the energy from the OVO Energy Women’s Tour and build on the impressive numbers that lined the streets in June.

“We want to make sure everyone is aware of the closures to several roads along the route. While closures will be temporary, please be advised that diversions may be in place and could affect travel times.”

From Nuneaton, competitors will head towards Atherstone before taking in the North Warwickshire countryside and then arrive in Meriden.

It will then head to the University of Warwick, before passing Kenilworth and Warwick Castles. Heading south into Stratford upon Avon, competitors will also have to take on three SKODA King of the Mountain climbs again – an ascent of more than 1,700 metres.

The first of those will be at Ilmington, before the second at Edge Hill on the outskirts of Arlescote while the third is at Burton Dassett Country Park.

It will then head through Moreton Morrell, Wellesbourne, Kineton, Tysoe and Shipston-on-Stour, Fenny Compton and Southam, and then towards Princethorpe in Rugby before finishing in the centre of Royal Leamington Spa.

ITV4 and Eurosport will be covering the race live as it unfolds.

For more information about the Warwickshire stage and expected times of arrival of the riders visit https://www.tourofbritain.co.uk/stage-four-timetable/