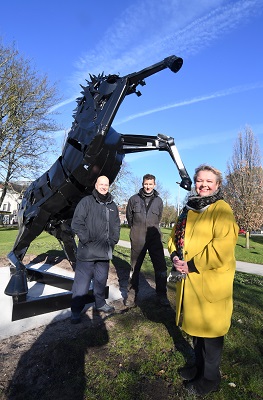 A steel plate horse sculpture which has been restored to its former glory has been officially unveiled at its new home in Coventry.

The 12 ft tall public piece of artwork of a black horse once ridden by Alexander the Great was located at the island at Greyfriars Green from 1985 until work began to change junction 6 of the Ring Road.

Trigger has been lovingly restored by specialist fabricator and installer of metal sculpture and artwork, Andrew Langley, from Art Fabrications in Fenny Drayton, Nuneaton. Andrew was a close friend of Simon, who sadly died in 2010.

The life-size horse has now been hoisted onto a mount at Greyfriars Green near his original location as part of a £2 million investment in public realm work funded by the Government’s Local Growth Fund through the Coventry and Warwickshire Local Enterprise Partnership (CWLEP).

Paula Deas, Operations Director at the Coventry and Warwickshire Local Enterprise Partnership, said: “The sculpture needed to be taken away during the building of the bridge deck at Friargate which was an ideal opportunity to carry out the restoration work which was much-needed.

“Art Fabrications has repaired the metal horse to an extremely high standard and the refurbished artwork is a perfect legacy to Simon Evans’ original sculpture.

“This magnificent and powerful public piece of artwork is now on display in Greyfriars Green not far from where Bucephalus, or Trigger, was previously located.

“We hope a new generation will love him as much as he has been in the past particularly as we countdown to Coventry being the UK City of Culture in 2021.”

Cllr Jayne Innes, Coventry City Council’s cabinet member for city services, said Trigger remained a symbol of strength and hope as intended when he was created by Simon Evans.

“I’m delighted that Bucephalus, or Trigger as he is affectionately known to local people, is back where he belongs,” she said. “Art is a really important part of successful towns and cities and I was keen that he returned to a spot where he can be seen and admired by lots of people.

“He will be visible from the Ring Road and thousands of people will see him every day as they walk to and from the station.

“I’d like to thanks the artist’s family for their patience while he was repaired and I’d like to thank Andy for undertaking the restoration and for doing such a fine job. I know it meant a lot to him to be able to complete the work. It means a lot to us to have Bucephalus back. He looks majestic in his new spot and I hope he will be admired for many years to come.”