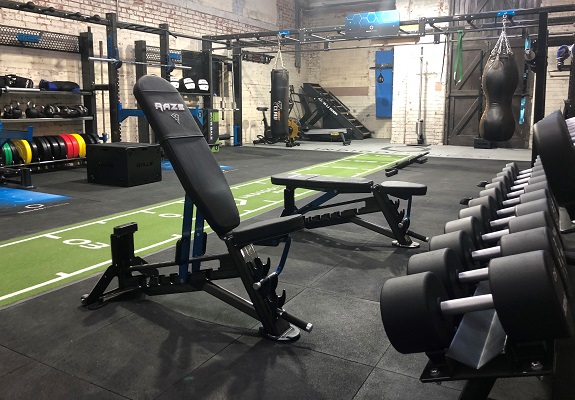 Exciting plans to extend the premises of a Warwickshire business that designs and manufactures fitness equipment have been submitted to Nuneaton and Bedworth Borough Council.

After spending £700,000 on refurbishing the former Co-Operative Society distribution centre, the business is seeking planning approval to spend a further £1 million on building two more units for warehousing and assembly work plus extra car-parking – and create more jobs.

The ambitious company is a supplier of strength and conditioning equipment to many elite sports teams including those in Premier League football, Premiership Rugby and national sporting bodies. They have also secured a contract with the Ministry of Defence and has supplied fitness equipment to the military across the UK, to international bases, and installed on board Royal Navy ships.

Nearer to their base, Indigo Fitness has provided the sound-proof flooring for the gyms at the £36 million Wave water park and the Alan Higgs Centre in Coventry.

Phil Littlewood, director at Indigo Fitness, said the plans had been drawn up since they were already running out of space despite having moved into their new home just over two years ago.

“We would like to develop on space in the yard to create a one-way system so that lorries don’t have to turn around,” he said.

"We need more space because we are already overflowing which is preventing us from being as efficient as we would like to be.

“We want to increase capacity so that when we get large orders, usually from the Ministry of Defence, we have enough room to prepare them without interfering with the current space used for manufacturing and assembly.

“The plans involve building two units which would give us extra warehousing and assembly space for large projects.

“We are continuing to grow – turnover this year is expected to be over £4 million – and we have 30 staff which we would like to increase to 35 with these plans.

“The Growth Hub has been with us every step of the way and their support has been invaluable.”

Gary Thyeson, account manager at the CWLEP Growth Hub, said Indigo Fitness was a business which had transformed a disused site into a thriving base.

He said: “These plans will take Indigo Fitness’s business to the next level since they provide a service which not many of their competitors can provide since they design, manufacture and assemble bespoke fitness equipment.

“Indigo Fitness is also expanding into new markets such as the education sector and they are also exporting since they have kitted out gyms at the Stade Français in Paris and a college in Singapore.

“It is great to see the business flourishing and if these plans are passed, it will enable Indigo Fitness to grow even further.”

Caption: The showroom at Indigo Fitness