Over 1,000 students trained to reduce the skills gap 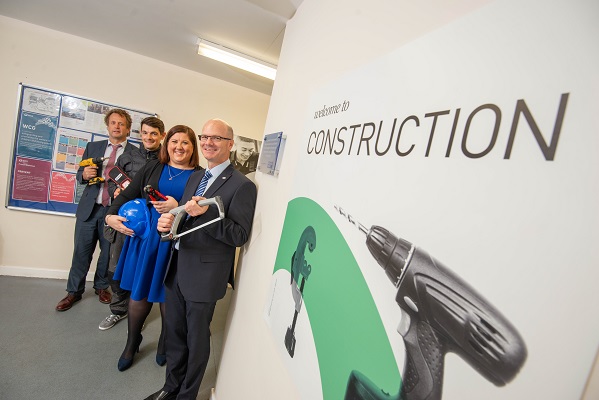 Over 1,000 young people have had the opportunity to learn a new trade at an enhanced construction learning facility at Royal Leamington Spa College since it opened three years ago to address a construction industry skills gap across the region.

The Construction Training Centre, part of the Warwickshire College Group (WCG), was redesigned and expanded with new classrooms and practical workshop areas to facilitate the teaching of electrical installation and plumbing in a range of different learning routes.

Since its completion, the redeveloped centre has seen a 15 per cent increase in student numbers, an increase in employer engagement and is able to deliver a broader curriculum. It now offers a range of post-16 qualifications and part-time courses alongside advanced and higher apprenticeships.

The £480,000 building was partly funded with £239,000 from the Government’s Local Growth Fund through the Coventry and Warwickshire Local Enterprise Partnership (CWLEP) with the remainder matched by WCG funding.

In total, over 50 construction businesses in Coventry and Warwickshire have been supported to address the recognised skills gap within their sector.

In addition, over the last two summers, the centre has been used to facilitate an international programme with students from China who have been taught UK construction methods. The programme drew on expertise from the planning office at Warwickshire County Council and local heritage organisations to educate learners about local construction methods and historic buildings.

The new facility has also helped launch the BTEC Level 3 Extended Diploma in Construction and the Built Environment which is now entering its third year of teaching.

This highly valued qualification is a predominantly classroom-based option that provides a route to university for students wishing to become an architect, quantity surveyor, or civil engineer.

The project is part of WCG’s strategy to support construction employers in the region with skilled students. In September 2019, a number of new courses will commence at its Rugby College to support the development of higher level technical and professional skills in construction and technology at levels 3, 4 and above.

Peter Husband, Group Deputy Principal, Apprenticeships, HE & Innovation for WCG, said: “This has been a timely investment to meet the current skills shortage in the construction industry which is experiencing a boom in commercial building projects and domestic housing builds, both regionally and nationally. Construction is a vital contributor to our economy and this project will help us address the growing demand for skilled plumbers and electricians that the sector needs.

“Whether you’ve just done your GCSEs, are looking for an apprenticeship or wish to change your current profession, the Construction Centre at Royal Leamington Spa College is ready to inspire the next generation of workers in the construction industry.”

Marion Plant OBE, chair of the Coventry and Warwickshire Local Enterprise Partnership’s Productivity & Skills Business Group and Principal and Chief Executive Officer of North Warwickshire and South Leicestershire College, believes that the Construction Centre redevelopment has addressed a real need to provide employers in the construction sector with the plumbing and electrical skills they require from future employees.

She said: “Skills shortages are among the top concerns for businesses and the Construction Centre at Leamington College is proving that it is addressing those needs.

“The Local Growth Fund was designed by the government for LEPs to help create jobs, support businesses and encourage growth in their areas. The number of students who have gained qualifications and secured apprenticeships in Coventry and Warwickshire is a real vindication of the funding in this project.

“Training young people for the construction industry is particularly vital with the number of new houses which need to be built in the region. The students who attend the Construction Centre will have an important role to play in helping to meet the Government’s housing targets.”