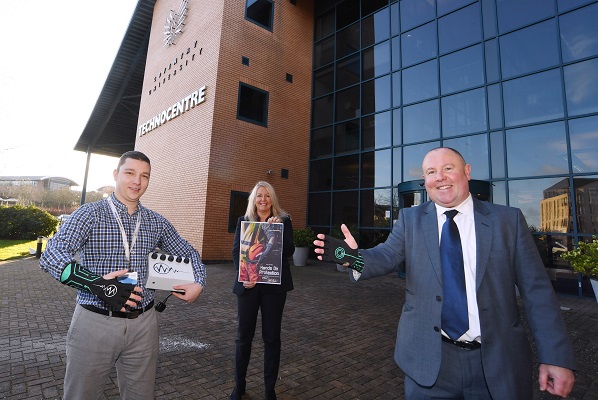 An innovative business in Coventry has secured its first contract for their new product which improves the safety of construction workers.

The digital glove monitors the vibrations created by heavy machinery when worn by construction workers operating tools. By analysing the data, it alerts them when dangerous levels are being reached so they know to take a break.

Hand Arm Vibration Syndrome can be prevented but once damage is caused, it can lead to a permanent lack of grip strength, white fingertips, numbness and tingling in the hands and arms.

Feraru Dynamics, which is based at the Coventry University Technology Park in Puma Way, has secured its first contract to supply the gloves to Coventry City Council for staff to use when constructing roads.

Andrei Feraru, co-founder and managing director of Feraru Dynamics, said industry feedback from the early stages of its conception had been positive.

“Health and safety is an important area for every business but particularly in the construction sector,” he said.

“I initially had the idea for the HAV-Sentry while I was doing a work placement at Rolls-Royce in Derby during my mechanical engineering degree from Coventry University.

“It changed my career path and I decided to invent a product that would ease hazardous exposures in the workplace.

“It is a legal requirement to protect people against vibration and this is a real issue since workers can develop an irreversible condition with one or two years’ continuous exposure. The symptoms are severe and can cause real pain.

“The feedback from industry has been really, really important along with the Growth Hub who made me aware of the ERDF grant. Their connections to businesses in manufacturing and engineering have also been vital.

“I am very grateful for the continued support we have received from Coventry University’s Engineering Faculty, the British Occupational Hygiene Society (BOHS) and many industry partners without which our ideas for this technology would have remained at a conceptual level.

“The material of the glove is currently being manufactured in Germany but we hope to bring the glove material sourcing and design manufacturing back to the UK.

“We have won our first contract which is with Coventry City Council and we are demonstrating it to a major company early in 2021 so we really hope it is going to take off.”

Cllr Jim O’Boyle, Cabinet Member for Jobs and Regeneration at Coventry City Council, said: “I’m really impressed by this new product which has been developed right here in Coventry. I’m also pleased that we have placed the first order with Andrei and his team in order to help improve safety for our own construction workers.

“Often all small innovative local companies like Feraru Dynamics need is a small boost of cash and the right connections to get new innovations to market. And that’s exactly what our Innovation Programme is all about.

“I wish Andrei every success with this new glove – it’s a great innovation which will hopefully protect workers from Hand Arm Vibration Syndrome.”

Justine Chadwick, account manager at the CWLEP Growth Hub, said Feraru Dynamics is a great example of a start-up company which needed business support to bring their innovative product to the commercial world.

“Andrei and his team have developed a product which has the potential to make a big difference to the health and safety of construction workers,” she said.

“At the Growth Hub, not only can we point SMEs in the right direction for applying for grants but we can use our extensive contacts to introduce them to people who can champion their innovation.”

Paul Markgraf, Business Advisor at Coventry City Council, added that when using tools, this development will lead to sustained improvements, for operator and controller, allowing remote monitoring of exposure levels, and adherence to health and safety requirements.