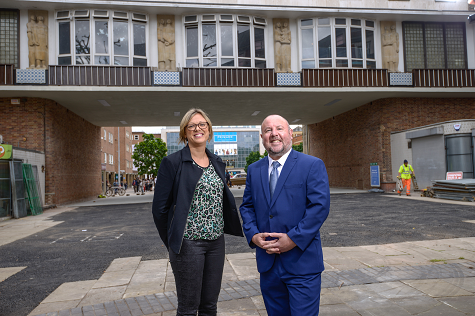 Much-loved sculptures can be seen in their full glory for the first time in over 50 years as part of a scheme to open a long-forgotten view of Coventry city centre.

The People of Coventry statues which feature four groups of figures depicting Coventry past, present and future have been obstructed from public view by the Nationwide building on Hertford Street facing Broadgate House.

But following the demolition of the 1970s Nationwide building to create a new walkway between Broadgate and Hertford Street, the sculptures by Trevor Tennant – who also designed the Lady Godiva and Peeping Tom Clock – have been illuminated.

The work is part of a £2.3 million project, which includes funding of £642,000 from the Coventry and Warwickshire Local Enterprise Partnership (CWLEP), and has also involved removing existing concrete paving slabs and installing new LED lighting.

The second phase of the work will now get underway to replace the temporary tarmac surface on Hertford Street with new surfacing and lighting before the end of this year.

It is the first time for 50 years the link from Broadgate to Hertford Street has been opened to the public to make it more accessible as Coventry starts the countdown to being UK City of Culture in 2021.

Cllr Jim O’Boyle, Cabinet Member for Jobs and Regeneration at Coventry City Council and CWLEP board director, said: “It’s a long-forgotten view of Coventry City Centre, and many local people and visitors will love it.

“We have lots of plans to revamp and improve parts of the city centre and this project is important because it helps to link Hertford Street with Broadgate.

“The next phase will be to lay new paving on Hertford Street so we’re hoping it will improve the look and feel of the pedestrianised street too, and be a boost to businesses.”

Sarah Windrum, a board director at the Coventry and Warwickshire Local Enterprise Partnership, said giving a new lease of life to this area of the city centre will encourage footfall.

“The completion of this project will mean a whole new audience will be able to see The People of Coventry lit up in their full glory which is fantastic,” she said.

“Opening up this area in Broadgate and Hertford Street will make it more accessible to more people which will be good news for traders and shoppers alike.

“The CWLEP is committed to boosting economic growth and increasing culture and tourism throughout Coventry and Warwickshire and this scheme will help to rejuvenate this area in the present and the future.”