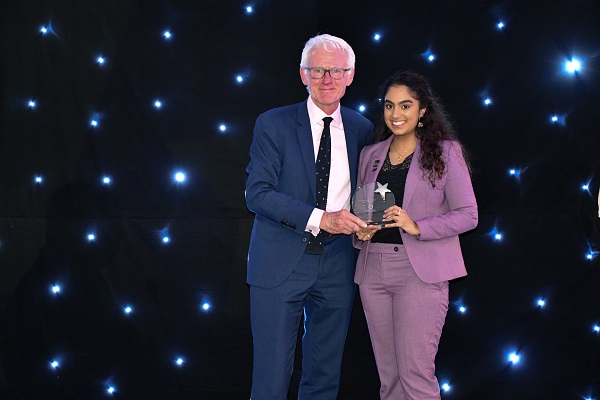 A Birmingham teenager, who has worked tirelessly to tackle the stigma surrounding mental health by sharing the story of her battle with anorexia, has been named West Midlands Thrive Mental Health Superstar for 2020.

She was one of 13 winners at the Thrive awards, which celebrate the people, teams or organisations who have made a significant contribution to improving mental health in their area.

Sophia, who is currently on a gap year after leaving school, was nominated in the Young Person category for delivering tailored workshops championing early intervention and encouraging fellow school pupils to talk openly about mental health.

She has also spoken at a national conference of healthcare professionals about the importance of involving young people in their own care, and works with a number of local NHS trusts.

“I have lived experience of mental health issues – I was in hospital and I felt that the services weren’t there for me when I needed them and so I decided to make a change,” she said.

“I work with the mental health youth board Think 4 Brum and I go into schools and encourage positive talk among young people around mental health.

“Winning this award means everything to me. If I could have seen myself here four years ago, I wouldn’t have believed it.”

More than 200 people – most of whom have professional or personal experience of mental health issues – celebrated the achievements of all the nominees at last night’s Thrive awards ceremony, which was hosted by broadcaster Adrian Goldberg at The Hawthorns, West Bromwich Albion FC.

Black Country: Sam Chatwin, who set up a Facebook group encouraging people struggling with mental health to meet up in a local pub and has grown this community of a few dozen people to more than 500 members.

Coventry, Warwickshire and Redditch: Leanne Howlett, who founded By Your Side, a forum which supports parents from Coventry and Warwickshire with perinatal mental health problems after experiencing these herself. She organises a range of social events and activities for affected mothers and fathers.

Shropshire, Telford & Wrekin, Herefordshire, Cannock Chase and Tamworth: Louise Dutton, who provides voluntary support at Stafford Hospital to help local families understand health care services and empower them to make decisions about the care that is right for them.

Birmingham and Solihull: The Bedlam 2019 Festival, a partnership which promotes mental health and wellbeing through the arts. More than 30,000 people were captivated by performances and exhibitions, including the dramatization of the highly stigmatised subject of perinatal mental health issues affecting the South Asian community.

Black Country: Brushstrokes, which offers a wide range of community-led activities for migrants in one of Sandwell’s most deprived areas, helping some of the most vulnerable groups in society to feel valued and connected.

Coventry, Warwickshire and Redditch: Sophia Pregnancy Loss Support, which supports families in the Nuneaton, Bedworth or North Warwickshire area who are suffering from the loss of a stillborn baby. This includes bereaved families sharing stories and pictures, and meeting on occasions that can be difficult times, such as Mother’s Day and Father’s Day.

Shropshire, Telford & Wrekin, Herefordshire, Cannock Chase and Tamworth: Shropshire Sanctuary, which enables individuals in crisis to talk to trained staff in a safe, confidential, non-clinical environment. Since Shropshire Sanctuary launched in 2017, it has supported more than 1,200 people, helping to prevent up to 700 deaths by suicide.

Sophie Meakin is studying a PhD exploring the public stigma associated with a mental health disorder. She is also a neuro-enablement support worker, helping people with issues including neurological disorders, postpartum psychosis, depression and anxiety. In her spare time, she volunteers with Birmingham and Solihull NHS Mental Health Foundation Trust and Shout UK.

Diane Sawyers has lived experience in mental health and is the voluntary manager at Holford Drive Community Sports Hub in Perry Barr, Birmingham, which she has set up as a safe haven for local residents. Her work includes helping young people with mental health issues through reassurance, often warm meals, training, volunteering and playing sport. Her support has enabling them to stay connected with their community and to avoid crime.

Kevin Priest works for Black Country Housing Group, where he has led a number of events and activities to help improve the wellbeing of his colleagues. These include bhangra dancing, mindfulness classes, wellbeing talks and group walks. He has also been instrumental in setting up initiatives with local primary schools to promote positive mental health.

Andy Street, Mayor of the West Midlands, said: “The Thrive awards are a brilliant way to recognise the achievements of the unsung heroes from the region who are making a positive difference to their communities. I’d like to congratulate not only the winners, but everyone who was nominated for an award.”

Cllr Izzi Seccombe, leader of Warwickshire County Council and WMCA portfolio holder for wellbeing, added: “As well as celebrating the fantastic work that is happening across the region, the awards are an important way of raising awareness of the stigma that still surrounds talking about mental health, which we need to break down.”

A special Outstanding Achievement award was presented to the former MP Sir Norman Lamb for his work as chair of the WMCA’s West Midlands Mental Health Commission, which led the development of the Thrive programmes to improve local people’s health and wellbeing.

For more information about the winners and the other shortlisted nominees, visit https://www.wmca.org.uk/media/3648/tmhsa-2020-programme-final.pdf