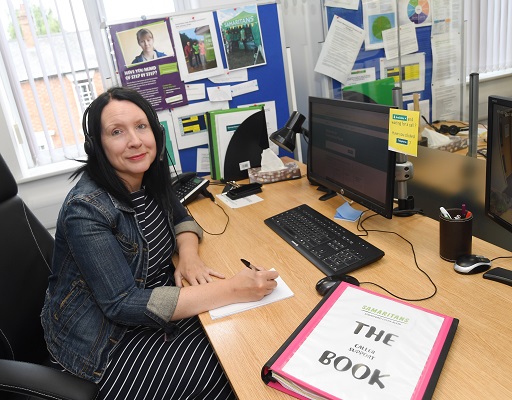 The hard work of Samaritan volunteers in Stratford to keep helping vulnerable people during lockdown has been praised by the branch’s director.

The Stratford-upon-Avon and District branch of Samaritans, based at Tyler House, had faced multiple challenges at the start of lockdown, such as volunteers needing to self isolate, a higher volume of incoming calls, plus reduced income from other charities no longer renting space at the Tyler House Community Hub.

But despite these obstacles, the team has stayed resilient and has been able to deliver a full service to callers in distress or despair, often suicidal right through lockdown.

Phil Cazaly, the branch’s director, was delighted with what the volunteers had achieved and was confident the branch would come out the other side stronger.

He said: “I couldn’t be prouder of our volunteers in how they’ve coped with all of this.

“At the start of March, we had over 100 listening volunteers – but roughly 30 per cent of them had to take leave in line with government guidelines as either they, or a member of their family had underlying health conditions.

“Our outreach work at places like hospitals, colleges and schools had to stop completely, and we had to hit the pause button for 14 new volunteers going through initial training.

“But Samaritans are extremely resilient. We always find a way to carry on – unless the government forced us to stop, there was absolutely no way we were ever going to shut down our services.”

The furlough scheme was a blessing in disguise for the branch – although they had fewer volunteers overall, a lot of those who remained had much more time on their hands due to being furloughed by their employers, or more flexibility to cover shifts as they were working from home.

Despite having fewer volunteers, the branch was able to increase listening capacity and answered around 30 per cent more calls and emails between April and June.

Volunteers who were available thoroughly cleaned desks and equipment before every shift, and their shifts were staggered so they could socially distance while answering calls. Training of new Samaritans was also moved online.

A dedicated line for NHS staff facing serious stress was also set up by the central Samaritan charity – staff who were struggling could call the line and immediately be connected to a Samaritan.

And volunteers even had to cope with occasionally being challenged by police when they were seen in Stratford during the height of the lockdown.

Phil added: “I had to draft a letter to all our volunteers to carry in their back pocket in case they were stopped by police.

“This actually happened at one point when a volunteer was in Stratford at 2am leaving a shift. We’re classed as an essential service by the government, so once they produced the letter to police, everything was fine.”

A grant given to the branch by Stratford District Council during the lockdown acted as a buffer to keep the charity going and gave them the confidence to restart recruitment and training. This was done online initially to rebuild volunteer numbers for the future.

Now that lockdown is easing, other charities that rented rooms at Tyler House are slowly coming back, giving the branch another stream of income that had disappeared during lockdown.

Although the branch has faced challenges, Phil is confident it will be able to get back to where it was soon.

“We’re grateful to Stratford District Council for approving our grant so quickly,” he added.

“Running a Samaritans branch during lockdown is not something I’d necessarily want to repeat. But we have a great team of volunteers and no matter the circumstances, we’ll always strive to keep our services going for those who need us.”

Businesses are being now supported by Stratford District Council to promote the safe reopening of the High Streets in response to Covid-19 through the Government’s Reopening High Streets Safely Fund which is funded by the European Regional Development Fund (ERDF).

The project has received £116,036 of funding from the England European Regional Development Fund (ERDF) as part of the European Structural and Investment Funds Growth Programme 2014-2020.