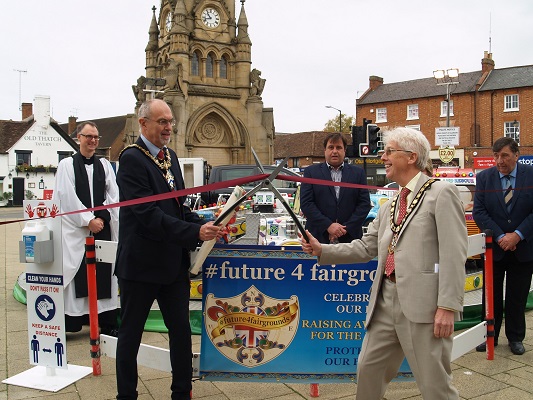 Stratford-upon-Avon is a place which knows the value of respecting history and keeping its traditions alive.

The Warwickshire town, famously the birthplace of William Shakespeare, attracts thousands of tourists annually who come for its rich history.

But the coronavirus pandemic has put one of Stratford’s oldest traditions under serious threat - and its organisers have said unless things change, it may disappear.

The Stratford Mop Fair, which has been a staple annual tradition in Stratford for centuries, had to be postponed this year due to the pandemic.

It sees Stratford’s streets transform into a traditional funfair, with dozens of rides, sideshows, and food stalls for people to enjoy.

The fair, which has been run by Bob Wilson’s Funfairs for generations, was due to take place on the weekend of October 11 but had to be stopped when the government announced tougher coronavirus restrictions in September.

Many of the events crucial to the firm’s income, including Birmingham’s German market and several other Mop Fairs, have also been cancelled or postponed.

And Willie Wilson, who has run the company since the 1970s, feels he and showmen like him who run these kinds of events are being forgotten about.

“It frustrates me that we could not hold the Stratford Mop this year,” he said.

“I think showmen like us are being let down. Plenty of other industries affected by the pandemic have been given a chance – I don’t think we’re being treated fairly.

“In the summer, we were told we could get back to work again, but we’ve been unable to hold the events we know we can put on safely.

“Stratford District Council and Stratford Town Council have tried their best to help us, just like I know they’ve helped many other businesses in the area, but ultimately these new government rules mean their hands are tied.

“We’re not asking for handouts either to keep us going. All we really want is to be allowed to host our events and make our money like we always have done.

“We’re still hopeful we can hold the Mop next year. It’s such a traditional event and it would be a great shame to lose it.”

The Stratford Mop Fair has been held in Stratford annually since the Middle Ages, and, ironically, was founded as a direct result of a deadly pandemic.

The first version of the Mop Fair was held in the 14th century after the Black Death had ravaged the local population.

People without work would come to the fair and offer their services to employers, who were only too happy to come as the disease had wiped out much of their workforce.

The workers would often carry equipment which reflected their skills – and the number of cleaners carrying mops meant the fair became known as the Mop Fair.

If employers found their hires were not up to scratch, they could return a week later at the Runaway Mop to hire new workers.

The fairs attracted so many people that entertainment such as fairground rides and sideshows sprung up alongside the hundreds looking for work.

The increasing popularity of the event over the years meant King Edward VI granted the Mop Fair a Royal Charter to exist in 1544, and later kings James I and Charles II gave the fair more charters.

These charters were enshrined in statute law by The Fairs and Markets Act 1847, which means Stratford has the right to hold a Mop each year.

During the First and Second World War, the charter was ‘kept alive’ by having a small stall or ride on a single street in Stratford instead of a full fair.

Indeed, it was Willie’s grandmother who ran the stall during the war years. And Willie was able to do the same again this year.

He added: “We were able to keep the charter alive by having one small ride this year. The pandemic didn’t stop us doing that at least.

“The last time the Mop was postponed was the war, and I don’t think the danger was the same this time around.

“I hope the situation improves and the government starts to see sense. If things do not get better for us, I worry about what the future might hold for the Mop.

“But we’ll be doing everything we can to try and hold it next year and for many years to come.”

Businesses in the district are being supported by Stratford District Council to promote the safe reopening of the High Streets in response to Covid-19 through the Government’s Reopening High Streets Safely Fund which is funded by the European Regional Development Fund (ERDF).

The project has received £116,036 of funding from the England European Regional Development Fund (ERDF) as part of the European Structural and Investment Funds Growth Programme 2014-2020.