Tribute to our much-loved colleague 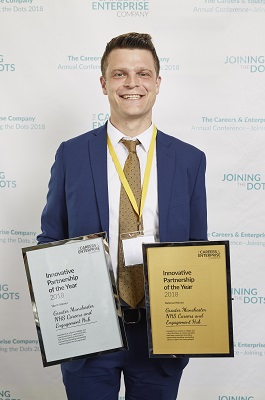 A Coventry woman who made a huge difference to the skills sector has been honoured by a national organisation which connects young people with the world of work.

Rachael Stewart was Skills Executive at the Coventry and Warwickshire Local Enterprise Partnership (CWLEP) when she unexpectedly died while on holiday with her husband, Steve, last year.

The Careers & Enterprise Company has re-named one of its awards, Innovative Partnership of the Year – in memory of Rachael Stewart which was presented by Sherry Coutu from Founders4Schools to Leo Clifton from Greater Manchester NHS Careers and Education Hub at its annual conference at Newbury Racecourse.

Rachael was a graduate trainee at the BBC in London before returning to Coventry to teach English as a foreign language in Hillfields.

The former Barrs Hill Grammar School student then initially joined Coventry and Warwickshire Training and Enterprise Council as an assessor for Investors in People before she was promoted to lead on education programmes.

She then moved to the Coventry and Warwickshire Local Learning and Skills Council where she led on programmes to support education business links, careers information advice and guidance, apprenticeships and further education colleges.

Rachael then led on vocational programmes for 14-18-year-olds for Warwickshire County Council before joining the CWLEP where she led on all issues related to learning and skills.

She also helped set-up education business partnership centres with major employers where children and young people could go to find out more about the world of work and follow courses to help them be more prepared for employment.

Steve said he was extremely proud that Rachael’s achievements had been recognised by an organisation whose ethos was similar to her own.

He said: "Rachael was a true Coventrian who loved her City and County. She held a passionate belief that all young people given the right learning and employment opportunities would be successful and achieve amazing things in their lives

“Sadly she wasn't with us long enough but in the time she was she made a difference to the lives of so many young people.”

Claudia Harris, chief executive of the Careers & Enterprise Company, said: “Rachael made a massive difference to the lives of young people in her personal and professional life and we are honoured to have recognised her work.

“Rachael was extremely generous, kind and caring and with her husband, Steve, launched a charity called Coventry Foyer to provide high-quality accommodation and learning for homeless and disadvantaged young people.

“The winner of the Innovative Partnership of the year – in memory of Rachael Stewart was the Greater Manchester NHS Careers and Education Hub which is a collaborative project bringing together 12 NHS Provider Trusts to give young people, learners and professionals a single point of contact to careers in the NHS.”

Jonathan Browning, chair of the CWLEP, said: “We were all extremely shocked and saddened when Rachael suddenly passed away and we still miss our much-loved colleague.

“This award is a fitting tribute to remember Rachael’s fantastic work because she was a huge advocate of the importance of young people gaining work experience in businesses to help them choose their career path.”

Caption: Leo Clifton with the award