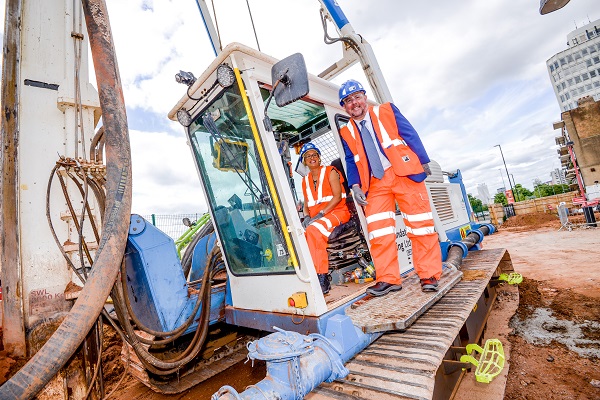 A leading construction company has been awarded two major contracts as part of the £82 million Coventry Station Masterplan to transform the fastest growing station outside London.

Coventry City Council is working in partnership with Network Rail, Virgin Trains and other rail operators, Transport for West Midlands, Friargate Coventry LLP and other stakeholders to create a new-look gateway for the millions of passengers who arrive in the city by train each year.

Buckingham Group Contracting Ltd has been awarded contracts to deliver phase one (footbridge and canopies) as well as phase two which comprises a multi-storey car-park, bus interchange, a second station building facing onto Warwick Road, a new taxi rank and boulevard ready for Coventry being UK City of Culture in 2021.

The work involves constructing a new footbridge and canopies along with the structural completion of the access tunnel under Warwick Road, new station entrance and building a 633-space multi-storey car-park which will provide an additional 300 spaces at the site.

This part of the project has received £27.510 million funding from the Government’s Local Growth Fund through the Coventry and Warwickshire Local Enterprise Partnership (CWLEP).

Minister for Local Growth Jake Berry MP said: “We’re committed to boosting economic growth across the Midlands Engine and building a Britain fit for the future.

“With support from over £27 million from the Local Growth Fund, Coventry Station will provide more train services for hard-working commuters and better access in and out of the station. The upgrades also mean greater capacity for visitors seeking to do business and see the city’s much-loved attractions.

“Our modern Industrial Strategy has transforming transport infrastructure at its heart, and this project is a positive example of it in action.”

Buckingham Group Contracting Ltd has begun work at the station which is a Grade II listed building to create a structure with a similar ‘light and airy’ feel. The canopy extensions will also be sympathetic to the existing building.

When it is completed, the new footbridge will improve passenger flow and congestion on the platforms and will connect the new station entrance and multi-storey car park once the future phases of work are completed.

“The project will be a key part in the creation of the new Gateway Station that will benefit the millions of passengers who use the station each year and support the city’s preparations for City of Culture.”

Councillor Jim O’Boyle, Cabinet Member for Jobs and Regeneration at Coventry City Council and CWLEP board director, said it was exciting to watch the Coventry Station Masterplan become a reality.

He said: “This is another step forward in creating a railway station which reflects the needs of Coventry and the wider area in the short, medium and long-term.

“Money from the Local Growth Fund is being invested in this project which will really transform the station. It’s the fastest growing station outside London and this investment will ensure it provides an impressive welcome to the city. It will also help us attract business and leisure visitors to the city.”