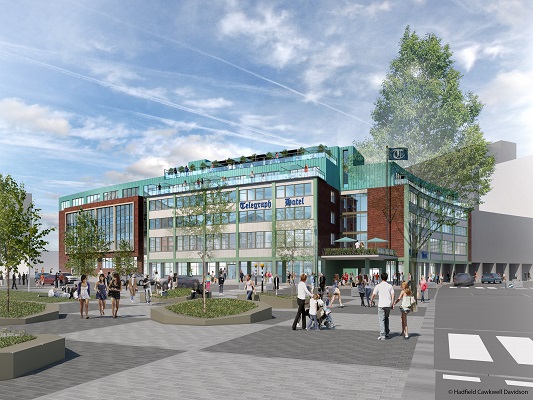 The decision to save two of Coventry’s most iconic buildings from the 1950s has been praised by the country’s leading heritage organisation.

The former Co-Operative building in Corporation Street is being transformed by EDG Property into 62-high specification apartments including an internal park and rooftop terrace, as well as featuring cafes and restaurants.

The Coventry Telegraph building, just a few metres away, will become a 1950s-style hotel, under plans put forward by owners Complex Development Projects (CDP), the firm behind FarGo and the Electric Wharf live/work development.

The two 50s buildings will line up alongside some of the most prestigious new development projects from across the globe at MIPIM – the world’s biggest property show – next month.

Historic England, the organisation which protects and champions England’s historic environment, says the re-modelling of the two buildings is an exemplar of what can be done with Mid-Century architecture.

Veryan Heal, Director of Planning for Historic England in the West Midlands, said: “These two historic buildings, both of which are excellent examples of Mid-Century architecture, had outlived their original uses and had been empty for several years.

“These locally listed buildings are part of Coventry’s heritage and we are delighted they have been taken on by developers who have an appreciation of their style, and imagination of just what they could become, and a determination to push their projects forward.

“Coventry is known the world over for the way it was remodelled in the years after the devastation of World War II, and it is wonderful that these two buildings, both of which mean a great deal to the people of the city, will be returned to vibrant economic use while retaining their character.”

CDP and EDG are both members of the Coventry and Warwickshire MIPIM Partnership which is made up of around 20 private sector companies and organisations who help finance the partnership’s presence at the four-day event.

Ian Harrabin, of CDP, said: “The 1950’s rebirth of Coventry is a huge part of the city’s story and could so easily be lost through redevelopment just at the time when post war architecture is becoming appreciated. There is a big focus now on city image and the visitor economy in the lead up to City of Culture in 2021 and now is the time to celebrate this important era.

“The Telegraph and The Co-Operative projects are great examples of how our notable 50s buildings can be reused, whilst retaining their unique character. Both Neil and I hope that this will spark others to look at the quality of other buildings before they decide to demolish.

“If you look at The Telegraph and The Co-Operative alongside the Belgrade Theatre, then Corporation Street really will be a celebration of a period of architecture which is now far more widely appreciated than it was just a decade ago.

“With so many city centres looking so similar, they give Coventry a chance to offer something very different.”