Two new directors appointed to the CWLEP board 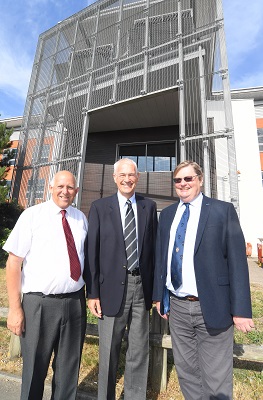 Two significant figures in local government have been appointed to the board of directors at the Coventry and Warwickshire Local Enterprise Partnership (CWLEP).

Cllr Tony Jefferson has vast experience of the business world having worked at British Steel, British Gas and the former Leeds Permanent Building Society as well as running his own consultancy in leadership and management for SMEs.

In 2014, he was elected to serve the Welcombe ward as a district councillor and a year later, he was selected as Chair of the Overview and Scrutiny Committee at Stratford-on-Avon District Council.

Last year, Cllr Jefferson became Portfolio Holder for Health and Wellbeing before he was elected leader of Stratford-on-Avon District Council in May this year.

Cllr Ian Lloyd was elected to the Heath ward in Bedworth in 1990 which he served until 2008 and during that time he was appointed Mayor of Nuneaton and Bedworth in 2003.

For the last nine years, the 60-year-old has been the elected ward councillor for Camp Hill in Nuneaton.

Cllr Lloyd is currently the Portfolio Holder for Arts, Leisure and Economic Development at Nuneaton and Bedworth Borough Council.

The appointments will see Cllr Jefferson and Cllr Lloyd become part of a 16-strong board of directors at the CWLEP which was established in 2011 to drive growth and create jobs across the whole area.

Jonathan Browning, chair of the CWLEP, welcomed Cllrs Jefferson and Lloyd to the board of directors, who meet six times a year.

He said: “The board has a crucial role to play in delivering CWLEP’s policies and programmes which is why it is made-up of private and public sector representatives as well as the two universities in our area.

“Both men bring a great deal of experience to the board which will be pivotal as we continue to drive forward the economy and create jobs throughout Coventry and Warwickshire.

“Cllrs Jefferson and Lloyd are committed to helping their towns and the wider area grow because a strong economy is for everyone’s benefit.”

Cllr Jefferson said the CWLEP was a key source of funding for vital projects in the area and he is keen to fully participate in board meetings.

“Being part of the CWLEP board is going to be absolutely fascinating,” he said. “It is a major source of funding and helps shape Coventry and Warwickshire in a significant way particularly at a time when there is going to be substantial change.

“Brexit means there will be a level of uncertainty and there is currently an enormous amount of technological change which is particularly affecting the motor industry but it is wider than that.

“There are also very significant changes in employment patterns with the potential for people having to work a lot longer into their mid to late 60s, and the growth of the Gig economy.”

Cllr Lloyd said he is looking forward to representing the council on the board of the CWLEP which is led and run by business for business in the private and public sector.

He said: “It is a new challenge and a different challenge that I will be expected to deliver on.

“We have the regeneration of Nuneaton town centre to look forward to and I will be working closely with the CWLEP, Warwickshire County Council and Nuneaton and Bedworth Borough Council to deliver that. These are exciting times.

“Partnership-working with the business sector is extremely important because if we all pull together, we can deliver on the projects which people expect and regeneration of our town centres is really important.”