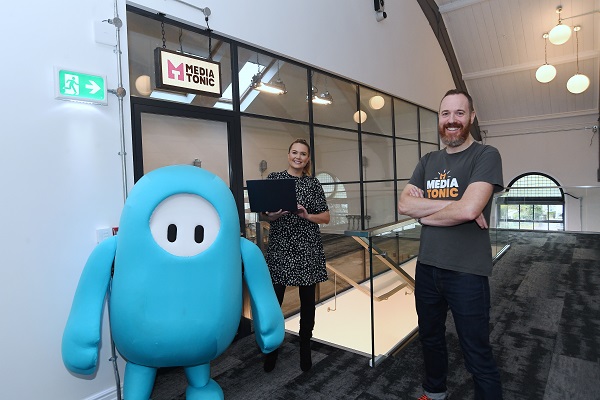 One of the UK’s leading video game developers is opening a new studio in Leamington Spa, creating an estimated 60 new jobs by 2022.

Mediatonic's new studio will operate under COVID-19 restrictions and guidelines, but the team look forward to opening the doors to their new home when it's safe to do so.

The move will see Mediatonic hiring a new team to complement their 270-plus colleagues already developing an eclectic blend of PC, mobile and console titles across their existing locations. The company will take up residency on the Mezzanine floor at 1 Mill Street, which is based on the corner of Mill Street and Leam Terrace.

This latest arrival in Leamington means the south Warwickshire region can now boast yet another leading video games studio, with Mediatonic joining the likes of Ubisoft, Playground Games and Codemasters who all operate close by.

The town's cluster of world-class studios, located in such close proximity to some fantastic independent studios, is a key part of what Mediatonic’s VP of Art, Phil Warner, says attracted them to Leamington.

Phil said: “Mediatonic has always looked for an active community of developers around its studio locations—that’s something we feel is hugely important to drive creativity, both within our teams and across the region.

“We fell in love with the feel of 1 Mill Street as soon as we saw it and we're delighted to be able to open our new studio alongside so many other like-minded businesses.

“To be able to make use of so many additional facilities, from world-class presentation spaces through to the on-site podcast studios, we feel that 'Mediatonic Leamington Spa' will be a wonderful and important addition to our studios in London, Madrid, Brighton and Guildford.

“We've already built some brilliant relationships with other video games companies within the town, and we’re excited to join such a vibrant game development community and look forward to the opportunity to share expertise and stories.

“We have a long-term commitment to creating engaging seasonal content for our Fall Guys player-base, and with exciting projects in the pipeline, we are looking forward to welcoming industry talent across a wide range of disciplines to join our team in Leamington.”

Mediatonic is the fifth business to sign up to 1 Mill Street – which opened its doors in November – and features flexible offices, dedicated desks and hot-desking, a video and sound studio, The Muse Coffeehouse, meeting areas and a world-class events space.

Nigel Shanahan, founder of 1 Mill Street, added: “Mediatonic’s arrival is fantastic news not just for 1 Mill Street, but for the wider town as it will enrich Leamington’s gaming cluster and encourage collaborative working between themselves and the wider business community.

“The move also allows Mediatonic’s staff to split their time between an office and home environment – and their commitment to 1 Mill Street alongside four other businesses vindicates that this is becoming a growing trend within the business community.”