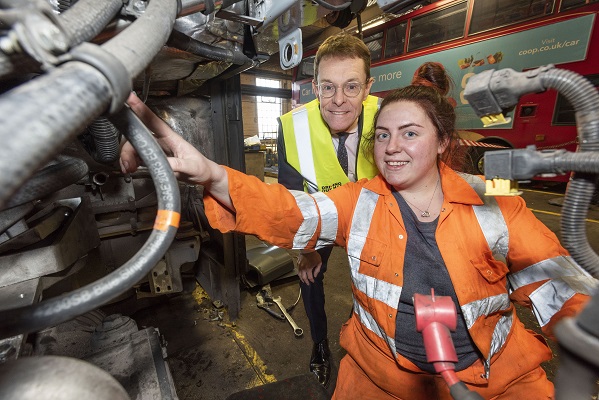 A bold ambition to deliver the cleanest bus fleet in the UK outside London was announced today by Mayor of the West Midlands Andy Street.

The goal is for the entire fleet in the West Midlands metropolitan area to meet the latest ‘Euro VI’ emissions standard by April 2021– cutting harmful pollution across the bus network by up to 95 per cent.

Buses with Euro VI engines are far cleaner than older models – helping to improve the health of thousands of people who live and work in the area and to reduce the emissions that cause climate change.

To help bus companies replace or upgrade their most polluting vehicles, Transport for West Midlands (TfWM), which is part of West Midlands Combined Authority (WMCA), has waived the fees it charges them for using the region’s bus stations and roadside passenger information for a year.

This has given the companies an extra £2.7m this year and this will see 360 buses replaced or upgraded. There are about 2,100 buses and 29 operators across the West Midlands metropolitan area.

“So my ambition is for every bus in the metropolitan area to be replaced or upgraded by April 2021.

“We have already given £2.7m this year to help the bus operators, but we will need to find more money to make this happen and I am determined to get this for the West Midlands.”

The Mayor said TfWM was also working with the operators to make sure there would still be enough buses to serve all communities while vehicles were off the road for retrofitting.

Cllr Roger Lawrence, leader of Wolverhampton City Council and WMCA portfolio holder for transport, added: “Reducing bus emissions is a vital part of our programme to improve people’s health and quality of life by cleaning up the air.

“Buses getting caught up in traffic congestion are adding to local air pollution. We have therefore made the bus sector a priority for tackling local air quality.

“Cleaner, greener buses will also encourage more car drivers to leave their vehicles at home and take the bus instead – which will reduce pollution even more.”

David Bradford, managing director of National Express West Midlands, said: “As part of the Bus Alliance with Transport for West Midlands we work very closely together on our commitment to improve air quality and reduce harmful emissions in the communities we serve.

"In the last four years we've invested more than £100m in upgrading our bus fleet. This includes over 350 brand new buses which have some of the cleanest engines on the market, as well as refurbishing our older vehicles with cleaner exhausts.

"Alongside our investment in cleaner, greener vehicles, the bus priority measures being delivered through the Alliance is helping to tackle congestion and clean up air across the West Midlands."

This ambition, if successful, would see the West Midlands matching London, where all buses will meet the Euro VI standard by October 2020.

The Mayor’s plans were also boosted this month by Coventry City Council and National Express winning £2.2m from the Government for ten new electric buses and Wolverhampton City Council securing funding for one electric bus.

These will operate on major arterial routes which experience high levels of congestion and have been identified as pollution hotspots.

In all seven local authorities in the region, nitrogen dioxide (NO2) and/or particular matter concentration thresholds are currently exceeded (relative to EU limits).