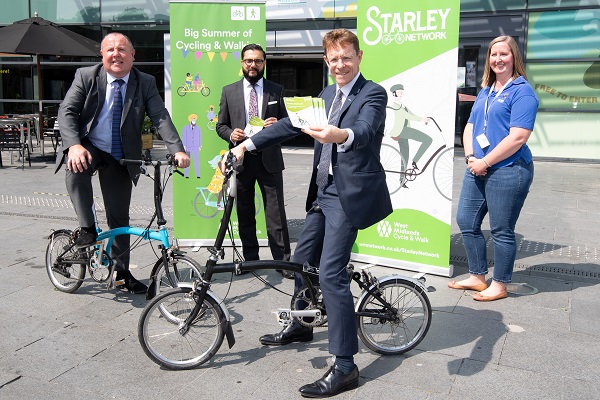 The Starley Network of safe cycle routes across the West Midlands will benefit from a £13 million Government active travel grant announced today.

The second round of Active Travel Fund money, handed to Transport for West Midlands (TfWM) and its partner councils, will go towards the delivery of the network announced during the summer.

Named in honour of the Starley family of Coventry industrialists who pioneered bicycle manufacturing, the Starley Network pulls together almost 500 miles of existing routes and towpaths, planned cycling infrastructure and safe walking areas.

Other routes to receive funding include Wednesfield Road in Wolverhampton, and a cycle lane along the A457 corridor from Birmingham City Centre to Smethwick. Solihull will receive funding for cycle parking at popular shopping destinations, as well as a major upgrade of the cycle lane linking Meriden to Millisons Wood.

Walsall Council will be using its share of the funding to provide safer walking and cycling routes for school pupils, amongst other schemes. Smaller projects, such as offering free cycle racks for organisations to encourage more visitors to cycle, will also be extended and enhanced with the new funding.

The grant from the Department for Transport (DfT) follows £3.85 million from the first round of funding during the summer, which has already been used on fast track schemes to improve safety for cycling and walking.

Andy Street, the Mayor of the West Midlands, said: “I’m delighted that we’ve secured a further £13m from the Government to help us to continue to build our Starley Network.

“We all know that cycling and walking are good for our physical health and good for the environment, especially as we face up to the climate emergency in the region.

“But many are not yet confident enough to get out on two wheels because they do not believe the right infrastructure is in place. That is why we have launched the Starley Network – a network of safe, well-maintained routes between our cities, towns and villages – to address these concerns.

“This latest funding from Government means we can now get on and start completing more critical schemes as part of our Starley Network, ultimately leading to more people cycling.”

The Active Travel Fund grant means that TfWM, which is part of the West Midlands Combined Authority (WMCA), will have invested more £40 million in cycling and walking infrastructure over the last two years.

Cllr Ian Ward, WMCA portfolio holder for transport and leader of Birmingham City Council, added: “With the first round of funding we have already started to make a difference – creating more safe spaces for people to cycle and walk, and reducing traffic.

“TfWM, working with its council partners, is delivering long-term improvements to offer people a safe, healthy and fun alternative to the car while helping us reduce traffic congestion and improve the air we breathe.”

This investment in active travel meets the WMCA’s aim of improving health and reducing carbon emissions as set out in the region’s #WMCA2041 plan to tackle climate change.